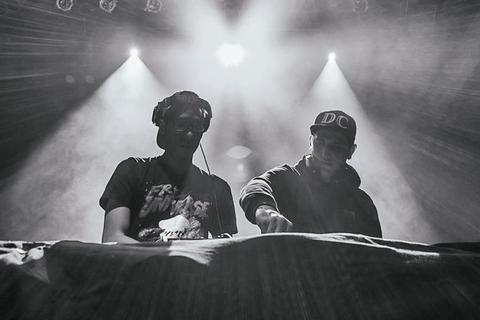 After developing respectable solo careers as DJs and producers, long-time friends Billy the Gent and Long Jawns officially banded together as Gent & Jawns becoming an unstoppable force in the world of club music. The release of their now classic Moombahton anthem “Vibrate” catapulted them to the top of everyone’s list of producers to work with and landed them remixes for Datsik, Bare, and Muffler, as well as collaborations with Nadastrom, Torro Torro and JWLS.

In early 2012 they worked with mega-producer Diplo on his Express Yourself EP, which topped the iTunes charts as the number one electronic album. They followed up with an absolutely stunning remix of the title track “Express Yourself,” which saw repeated plays by many of the top DJs in the world. Shortly after, they released “Holler,” their first official EP on Mad Decent’s Jeffrees label. Jeffrees went on to earn the iTunes Label of the Year honors. The duo ended the year proper when they released “TURNUP”, a party-inducing track that’s being called the biggest trap song of 2012. In two weeks the track saw 80,000 plays and held position as the top electronic song on SoundCloud.

While known for their world-class production, Gent & Jawns’ secret weapon is their ability to perform live. Long Jawns is a legend in his hometown of Richmond, VA, where he is widely known for throwing the biggest and best parties the city has seen in years. Billy The Gent began DJing with support from his friend Dave Nada (Nadastrom, creator of Moombahton) in Washington, DC and quickly became a staple at the famous U-Street Music Hall. Together, Gent & Jawns have gone on to share the stage with top notch acts like Diplo, Dillon Francis, Nadastrom, Caspa, Craze, Die Antwoord, and more.