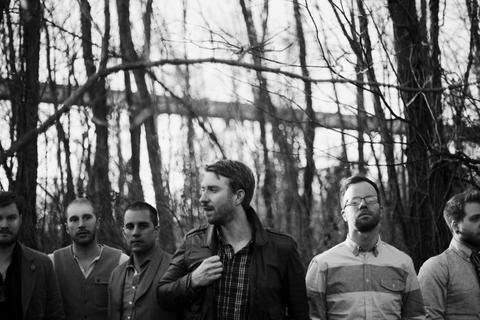 Bronze Radio Return know what it takes to get to the heart of American roots music. You have to go to America’s roots.

When it came time for the band to record their latest full-length album Up, On & Over, they found themselves in the foothills of the Appalachian Mountains on a farm in the tiny town of Louisa, Virginia. In their journey as a band, recording in different parts of the United States has opened up their ears and minds. “We find it’s easier to get into a creative zone when we’re outside of our element,” lead singer and guitarist Chris Henderson explains, “we were surrounded by goats, chickens, and farmland.” The trek south this year was just the latest venture for Bronze Radio Return (Henderson, drummer Rob Griffith, lead guitarist Patrick Fetkowitz, keys player Matthew Warner, bassist Bob Tannen, and harmonica/banjoist extraordinaire Craig Struble) who are no strangers to recording in new – and sometimes remote – places.

Their story starts in Hartford, where members orbited each other at The Hartt School, one of the country’s top music conservatories. After finding each other and solidifying their line-up in 2008, they began writing music and found that their surroundings played a huge part in their creative energies. While writing their debut album Old Time Speaker, they bounced between the buzzing urban community in Hartford, where Henderson says melodies and chord progressions come naturally, and a remote Maine town, where they holed up to focus on lyrics. When they went into the studio in 2009, they went, as Henderson says, to “a place we’d never been before with a producer we’d never met to play a bunch of songs we’d never played before.” The producer was Chad Copelin (Ivan & Alyosha, Ben Rector), who would go on to form a solid and lasting partnership with the band.

Two years later, Copelin brought the band to his home turf in Norman, Oklahoma to record their follow-up album Shake! Shake! Shake! The small community lived and breathed music. The Midwestern neighborliness and kindness shined through on the album – drenched in harmony, warmth, and soul, the songs were made to make people come together. Sing-alongs, foot stomps, hand claps, and all.

It was during this time that the band began to get picked up for numerous TV spots and ads. Shake! Shake! Shake! produced over 50 syncs in the past year-and-a-half when all was tolled. Highlights include a worldwide Nissan Leaf commercial and a national Behr Paint/Home Depot ad. In addition, HBO, ESPN, NBC, MTV, the CW, American Idol, ABC Family, USA, CBS, NBC, Showtime and more licensed their music for shows, promos and bumpers. Instead of waiting for the syncs to break them out, Bronze Radio Return threw themselves into a rigorous touring schedule. “We’ve been really fortunate to have our music used in a lot of TV and film, and also made some real traction at radio. But this band is first and foremost a live band,” says Henderson. The band has spent the better part of the last two years playing every corner of the US and winning fans over with their packed-with-energy live show.

Cut back to 2013 and find Bronze Radio Return back in Virginia with Copelin at their side recording Up, On & Over, the band’s most ambitious release to date. “You can hear there’s an obvious progression with this batch of songs. It’s very much still a Bronze Radio Return record but we really found ourselves getting into a groove during the recording process which allowed us as a band to dig deeper into the material than ever before,” says Warner.

The album is a collection of songs defined by the band’s ability to step out of their comfort zone and push forward. Leading the way is first single “Further On,” an optimistic anthem steeped in summertime brightness. “Further On” started making waves months before the album’s anticipated release, when it was tapped as the soundtrack to the PGA Tour’s national ad campaign featuring Tiger Woods and Phil Mickelson. The rest of the record follows suit with strong hooks, twangy guitars, and driving percussion. While we can’t be sure where Bronze Radio Return’s story will take them next, Up, On & Over is an exciting new chapter in their journey. Keep an eye out as their story unfolds, taking us all for a ride moving... well… Further On.