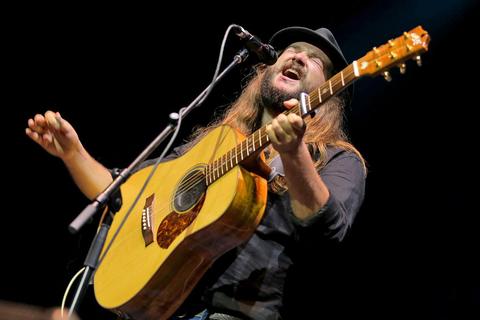 Nano Stern’s phenomenal rise as an artist and his attraction of a loyal, global and growing audience world-wide is rooted in his musical virtuosity and the mesmerizing, rousing emotional power of his live performances.

Though singing mostly in Spanish, he transcends language barriers with his fluency in English, as well as his ability to communicate in a range of other European languages. His passionate, poetic themes of love, spirit and justice, delivered with his intense energy, musicality and vocal prowess resonates strongly with audiences of all ages and cultures.

“Nano Stern is a huge talent, whether he is playing as a duo at an
intimate show, hosting and entertaining the crowd about Chilean
wine, or playing the big stage with his outstanding band you know
he is an artist that the audience always want to hear more from...
he was a favourite at WOMADelaide and won us all over at WOMAD Charlton Park.” — Paula Henderson, Artist Programmer, WOMAD UK, 2013

A guitar virtuoso with a powerful singing voice, Nano Stern is a student of the music of the world, committed to a lifelong journey of discovery and exchange. His music draws deeply from the traditional music of Latin America and European folk music, mixed with the intricacies and improvisation of jazz and the powerful expressions of rock.

Nano is riding the crest of the new wave of Chilean Song, with a large following at home, in Chile, and a growing non-Spanish audience world wide (UK, Australia, Sweden, Slovenia, Italy). He recently sold 5000 tickets to his shows over two nights in Santiago.

“The new songs confirm Stern as one of the most powerful voices
to have emerged in Chile since the legendary Victor Jara.”
— Tony Hillier, Rhythm Magazine