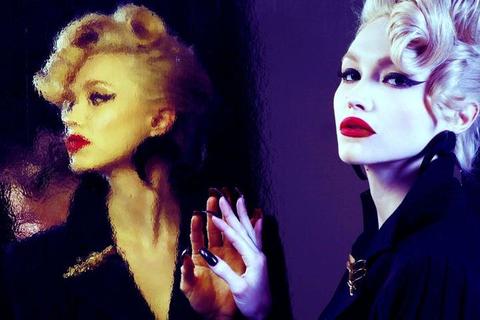 When she was 16-years-old, Ivy Levan hotfooted it out of her Arkansas hometown and moved to Los Angeles to launch the singing career she’d long coveted. “I didn’t have any real plan,” recalls Levan, now 26. “I just knew I needed to get out of there as fast as I could, so two weeks before I was supposed to graduate high school, I took off for L.A. with my mama.” After a few false starts—including a stint at a major label that tried to refashion the fabulously brash singer-songwriter as a Celine Dion-esque balladeer—and a foray into acting and modeling to make ends meet, Levan breathed new fire into her musical pursuits by returning to her Southern heritage. From Benjamin Weinman of The Dillinger Escape Plan to world renown DJ, Diplo, Ivy's blossoming talent has been recognized by some of the most respected players in the music community. Now, with her debut EP Introducing the Dame on Cherrytree Records, Levan serves up a brand of blues-infused pop that boldly flaunts both her larger-than-life voice and gritty-yet-glossy, in-your-face energy.

With a sound that Levan alternately dubs “swamp hop” and “punk-rock Motown,” Introducing the Dame is a four-track powerhouse built on fiery-sweet melodies, bright but dirty beats, and Levan’s endlessly smoldering vocals. Made in collaboration with her writing partners in the L.A.-based Blood Money Inc. and featuring guest musicians like Tomo Miličević of 30 Seconds to Mars, the EP also reveals Levan’s brilliantly roughneck wit as a pop lyricist. Whether delivering an ode to the almighty dollar (“Money”), a harmony-kissed hangover anthem (“I Don’t Wanna Wake Up”), a heart-on-sleeve serenade (“Hang Forever”), or a growling come-on that name-drops the Son of Sam (“Hot Damn”), Introducing the Dame keeps it high-powered and passionate but never skimps on good, filthy fun.

The show at Trinity Hall @ Old School on Friday, March 14