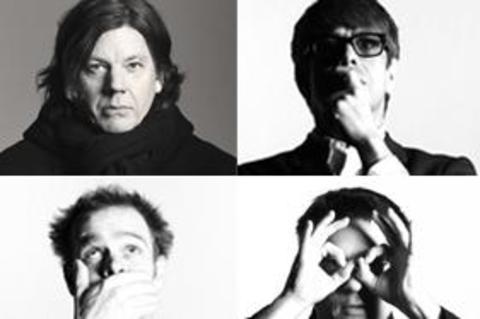 Hailing from Los Angeles, the black watch have made 18 critically-touted CDs of what The Austin Chronicle dubbed in 2011 "The Soft Boys in a tussle with The Velvet Undergound," the latest of which, "The End of When," was released in September 2013 on Austin's own Pop Culture Press Records. Fronted by novelist/Ph.D. English Lit professor/guitarist/vocalist/songwriter/painter John Andrew Fredrick, the black watch meld dreamy melodies, poetic lyrics, and a twin-guitar attack calls to mind "chaos in the calm, melody in the dissonance." Ex-of New Zealand's legendary The Chills axeman and co-vocalist Steven Schayer adds a sense of urgency and wildness to Fredrick's songs, which Trouser Press, Magnet, and The Big Takeover have praised as being "the dreamiest pop songs this side of My Bloody Valentine, with a voice that rivals Robert Smith's."

⋆ 12:00AM The Farewell Drifters