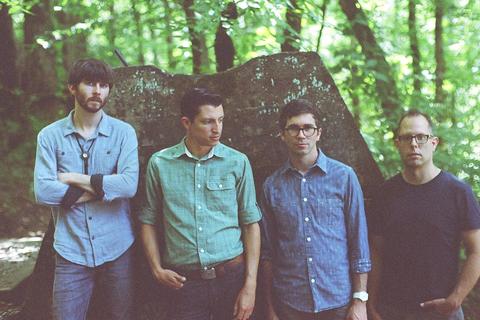 With their acoustic instrumentation and the anthemic thrust of their songwriting, the Farewell Drifters find themselves in the midst of what’s bound to go down in the annals of popular music history as an era-defining, youthful folk-rock boom. But the Drifters aren’t content simply to stomp, strum and sing with gusto. They bring a unique Brian Wilson-like sensibility to the movement, with intricately arranged harmonies and atmospheric, string-swathed studio shading that is newly showcased on Tomorrow Forever, the Nashville-based quartet’s fourth album and their first for their new label Compass Records.

When Zach Bevill, brothers Joshua and Clayton Britt and Dean Marold started making music together eight years ago, they aimed for the sweet spot between bluegrass and the Beach Boys’ artfully crafted, ‘60s studio pop. The band quickly became a crowd pleaser at multi-generational folk festivals and earned a presence on Americana radio and Billboard’s bluegrass albums chart where their 2010 release Yellow Tag Mondays debuted at #10 and 2011’s Echo Boom debuted at #6.

But, with the release of Tomorrow Forever, the Drifters have delivered their most accomplished and fully developed album yet. Collaborating with roots pop producer Neilson Hubbard (Matthew Perryman Jones, the Apache Relay, the Drifters’ 2011 Echo Boom) helped solidify the band’s sound, elevating their crystalline harmonies and acoustic foundation with gutsy electric guitar and orchestral-style drums. Clayton contributes Telecaster licks and 12-string acoustic runs, and the lion’s share of the tracks feature a standing approach to playing drum kit that studio ace Evan Hutchings developed in order to compliment the band’s intricate textures. Organ and piano parts played by Neilson and Zach help to fill out the sound, as do the ambient swells of Kris Donegan’s lap steel.

Even as they’ve upped the meticulousness of their music-making, The Drifters have reached the point in their lyric-writing where their chief aim is to translate personal struggle into anthems of communal uplift, to speak beyond the particularity of their experience and give voice to universal hopes, dreams and fears. Song after song, they strive to acknowledge their coming-of-age disappointment and the specter of failure without allowing themselves to be paralyzed by it. “We’re sort of restless people,” Zach offers. “Maybe everybody’s restless. We’re always in pursuit of something. If we don’t believe that whatever that is, is good and true, then we’ve got nothing.”

Josh, a self-described extreme introvert, concurs, “Without hope, I would give up. I would not be in relationships, because they’re hard. I would not go out; I would just stay home. There’s a pursuit of something there that’s powerful enough for me to keep putting myself out there.”

And when you get right down to it, putting themselves out there is exactly how the Farewell Drifters and their earnest kindred spirits throughout the folk-rock scene harness music’s power to unite fans around common desires. The Drifters also have something singular to offer: a sound that’s as richly layered as the emotional landscape it portrays, and catchy besides.

“I feel like we’re on the same trajectory we’ve always been on,” says Zach, “but now it feels like there’s a much larger audience out there that digs the kind of music that we’re making. And that gives me a lot of hope for this album.”

12:00AM The Farewell Drifters