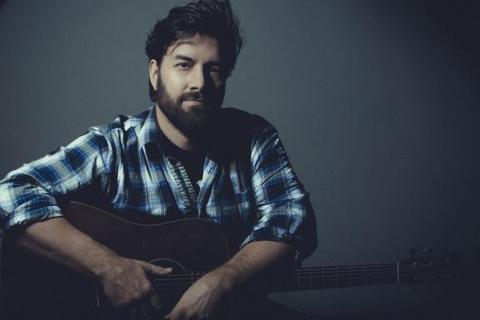 With the release of his latest album Burden of Proof, Bob Schneider breaks new ground. Exploring loss, lust, love, dark desires and skeptical optimism, Schneider has crafted lyrically and musically, his most ambitious and sophisticated album to date.
Born in Michigan and raised in Germany, Schneider was playing music and creating art from the time he was four years old. “I was left-handed, but the nuns at my Catholic school forced me to write with my right hand,” Schneider reflects. “But I still like to think of myself as left-handed. I’ve always thought of myself as a round peg in a square hole sort of person. Like I just didn't quite fit in. I was socially awkward and I think that led me to finding solace in imaginary worlds that I would create in my art and music.”
At age ten, Schneider’s father, an opera singer by trade, dressed him in a leisure suit and took him along to gigs where they’d perform jazz standards and other hits from the 1940s-70s.
Schneider spent his college years as a fine arts major, but dropped out to move to Austin and pursue a music career after taking to heart the words of singer-songwriter Terry Allen. “I remember him saying ‘If you’re going to do art, drop out of school and start doing your art and living your life ‘cause your degree’s not going to make a difference.”
So Bob Schneider blazed into Austin and has been packing houses and winning over audiences ever since, firmly claiming his place as one of the most sought-after entertainers in the live music capital. Schneider sells out venues coast to coast from New York, Chicago Minneapolis and Baltimore to LA, Seattle, Portland and San Francisco. His live shows are playful and raw, while on stage Schneider commands the room. He’s charismatic and friendly, bantering with his bandmates and heckling the audience. As he launches into each song with his whole being, the audience is instantly transported, tumbling through the dark recesses of his imagination.
Much like Jack White and Ryan Adams, Bob Schneider has mastered the art of keeping his audience on their toes, never knowing what will come next. Schneider dances to the tune of his own drum and the beat changes from album to album. With Burden of Proof, he has elevated his game once again, creating a brilliant and elegant album. “Some folks might think that I'm taking a big risk musically by getting away from the more easily accessible pop songs of the earlier records,” said Schneider. “But to me it seems like a natural progression that is more subconscious than conscious really.”
Schneider’s songs and albums thrive on the element of surprise, and the tracks on Burden of Proof are no exception, sure to be a crowd favorite, “Unpromised Land”—the first single off the album—packs all the energy of a Schneider performance into one fierce, rocking anthem. An instant stand out, “Swimming In The Sea,” captures the out-of-body, spine tingling magic of falling in love. Schneider adds, “I love love songs that go against the grain of what it means to be in love and how that's supposed to feel. It's rarely a walk in the parkfor me and ‘Swimming in the Sea' (which is something that I'm deathly afraid of) sort of captures the wonder and terror of being in love and not having any control over it all.”
Other highlights include the Leonard Cohen-esque “Digging for Icicles” highlights Schneider’s vast vocal range, his voice dropping as the song descends into mournful meditations. “The Effect,” gospel-inflected and danceable, evokes Graceland-era Paul Simon. With the deceptively simple “Tomorrow,” the album’s only cover, Schneider offers a stunning re-vision of the classic showtune, raw and unguarded. Amidst the hopetinged despair of “Wish the Wind Would Blow Me” Schneider tosses out what amounts to a playground insult, “I wish your mom was ugly/ And your dad was ugly too,” but then deftly twirls it into a disarmingly charming love note, “Then they couldn’t have had a girl/ To be as beautiful as you.”
Nearly every track on Burden of Proof features string arrangements composed by Schneider himself. The album also showcases Schneider’s decades-long creative relationship with the Tosca String Quartet. Schneider first paired with the quartet on “Love is Everywhere,” the hidden track off of his award-winning album I’m Good Now. At the time, Schneider wrote a string arrangement for the beautifully devastating “Weed Out the Weak.” That fan favorite has finally found a home on Burden of Proof, positioned amongst sensual charmers, danceable bursts of fire and bounce, and contemplative sojourns.
Longtime fans will recognize Schneider’s trademark fusion of eclectic musical styles, innovative compositions, and intricate, emotion-filled lyrics. Schneider croons, drawing listeners in with the promise of romance. Then the energy shifts, the strings swell, and the songs turn seductively tangy, twisted.
Veering away from the traditional music video model, Schneider is instead honoring the cinematic feel of Burden of Proof by engaging the talents and artistic vision of twelve film directors. Directorsinclude internationally renowned filmmaker Robert Rodriguez, who shot the video for Schneider’s AAA Radio hit “40 Dogs (Like Romeo and Juliet)” from his 2009 album Lovely Creatures, and award-winning photographer and director Dan Winters, whose photograph and drawings grace Burden of Proof’s cover and liner notes.
Schneider’s artistic exploration is not limited to the stage or the studio. He is also a celebrated sculptor, painter, and poet with two published books of poetry and art and another one forthcoming.
With Burden of Proof, Bob Schneider delivers a much-heralded explosive addition to his already expansive artistic canon, a work of sophisticated craftsmanship and a wild ride to boot.