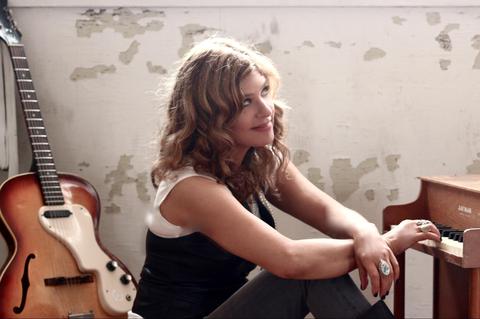 Louise Lynn Goffin, is talented singer, songwriter, producer, multi-instrumentalist and recording artist. She is fresh off a Grammy nomination as producer of Carole King’s Album “A Holiday Carole" and is finishing up a new solo album for early summer release 2014.

Louise grew up in an A-class University with a virtual PhD in Popular Music in the making as the first-born daughter of two of the generation’s most renowned songwriters, Carole King and Gerry Goffin. Born in Brooklyn, New York during the 1960s, Louise was brought to California’s famed Laurel Canyon as her parents were part of pop culture’s migration to the West Coast. Louise’s childhood was planted in the middle of the most exciting times in early popular music, absorbing influences of the times that have shaped what we know of music today.

Her musical talent provides the right color of instrumentation while her lyrics and top-line vocal phrasing often brings an emotional vibrancy to the music she helps create. On Carole King’s holiday record, she chose William Bell & Booker T Jones’ Stax classic “Every Day Will Be Like A Holiday” and Donny Hathaway’s “This Christmas.” As a producer, she brought out the best in King’s vocals, put her own indelible stamp on the music which lends a special seasonal flair.

For King, the album’s emotional highlight is undoubtedly “Chanukah Prayer”. “[Louise Goffin] had the brilliant idea to take the Chanukah prayer that I learned from my parents, and they learned from their parents, and back through generations,” she explains. “She said ‘I want to record you singing that and I’m going to build a track around it’”. The result is a warm, jazz-inflected tune that brings together three generations on vocals: King, her daughter, and her grandson.

Louise’s debut album “Kid Blue” was released on Elektra/Asylum. After recording and releasing her follow up album titled, “Louise Goffin,” Louise was invited to Island Records in England. The ten-day itinerary to meet the Island Records team and potential producers led to a personal geographical change that lasted a decade. Upon hearing her demo of a song called “Fifth of July,” WEA in the UK signed Louise. The album included the VH1 classic video hit “Bridge of Sighs.” A follow-up UK album was recorded in the early nineties at Astoria Studios, a houseboat turned recording studio owned by David Gilmour of Pink Floyd. Dave championed Louise and guest appeared on some of her recordings. Her UK Eastwest Records recordings also include a version of the U2 song “Sweetest Thing”, with additional lyrics by Bono not heard on the U2 version (these recordings remain unreleased).

Louise’s debut live performance was opening for Jackson Browne at Troubadour at just 17 years old. She played piano and performed some of her original songs. Goffin has also enjoyed playing with other known musicians as a side-woman, taking the empowered position of electric guitar player alongside Roland Orzabel in a major Tears For Fears world tour. Rehearsing in Peter Gabriel’s Real World Studios in Bath, England, she then travelled with the band for four months, first wooing audiences in Europe, then America and lastly stadium-sized venues in South America. Other cameos include playing banjo with the iconic Bryan Ferry in the video “I Put a Spell on You”. Goffin also sings a duet with Carole King on the theme song for the hit TV show Gilmore Girls, on Carole King’s song “Where You Lead”.

Recently Goffin’s been writing and producing her own new music and her single features backing vocals with Alice Cooper and Johnny Depp.

Louise is a highly sought after producer by the industries finest – as well as up and coming artists. She is a go-to songwriter for musicians that yearn to express their heart song in a manner that speaks to the masses.