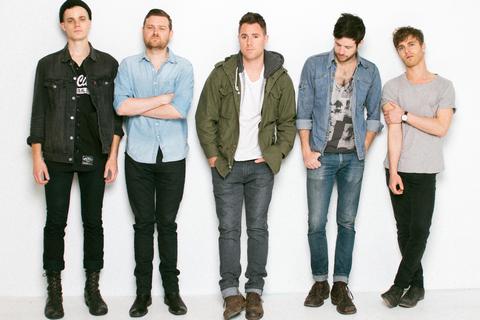 
"Teenage life—possibly adult life too... is all about what you want and can’t have. And then about what you receive and misuse." – Jonathan Lethem (The Paris Review)

A little over a year and a half ago, songwriter/composer Keegan DeWitt and multi-instrumentalist Jeremy Bullock stripped down a small Nashville row house to build a custom studio. In this space, and together with friend and drummer/producer Dabney Morris, they would record and eventually form a five-piece band around their debut album Youth. Initially shared digitally a little over a year ago, the album will now see a wide release through Mom+Pop on January 21st, 2014. Meanwhile, the infectious debut single “Thunder Clatter” is currently sitting at #3 on SiriusXM’s Alt Nation ‘Alt18’ chart. The deluxe single version of “Thunder Clatter” will be released on December 10th, 2013 and will include a remix by Twin Shadow, which premiered on Urban Outfitters’ Music Mondays blog earlier this month, as well as an upcoming remix by Small Black.

Their vision was simple: to share songs akin to fleeting, auditory memories. A collection of 13 captured moments, much like a found box of letters and photographs, Youth serves as a loose examination of how life refines us as we move through it, how the choices made along the way shape us in potentially unexpected ways. Mixing programmed sounds and live performances – and recorded in less than two months – each song was run through a TASCAM 4-track cassette tape recorder to maintain an intimate, diary-like feel. The lyrics scatter and focus, abstract and refine, encapsulating the elusive feelings of small moments cast aside, such as late night drives, the limitlessness of falling in love, and the freedom of finding a true friend or co-conspirator in an immense and sometimes empty world. The album transitions seamlessly between infectious electro-pop, tropical rhythms, and quiet washes of cinematic new wave reflection. It’s this evocative, cinematic quality that characterizes Wild Cub’s songs, influenced heavily by DeWitt’s extensive work in composing film scores (including 2013’s Academy Award-winning short documentary Inocente; 2013’s Sundance Audience Award for Best of NEXT winner This Is Martin Bonner; and 2010’sCold Weather).

Since its initial small release, press and touring around Youth has mounted steadily and surely. Paste, Consequence Of Sound, MTV Hive, and The Wall Street Journal’s Speakeasy blog (’12 Acts to Watch at the 2012 CMJ Music Marathon’) all shortly took notice. Things began to take on a break-neck pace of their own in early 2013, with Wild Cub performing at designer Rebecca Minkoff’s Fall ’13 NY Fashion Week show, snagging NylonMag.com’s ‘Band Crush’ stamp and major support from influential station KEXP (“…[Wild Cub’s] brand of darkly-tinged new wave recalls elements of the youthful abandon of John Hughes soundtracks, the baleful allure of Greg Dulli, and the clockwork electronics of New Order’s middle period”), while “Thunder Clatter” was highlighted in Entertainment Weekly’s ‘Singles Swap’ feature. Youth gainednotable UK press attention at this time from Clash Music, The Guardian, The Line Of Best Fit, and Top Shop, as Wild Cub’s tracks, remixes, and visually arresting videos continued to premiere in the States on sites including InterviewMagazine.com, RollingStone.com, Noisey, and SPIN.com, among others. The band completed its first two US tours and hit festivals like SXSW (playing eight shows), Hangout Fest, Lollapalooza (including a sold-out afterparty with UK stand-outs Palma Violets), and ACL Music Festival, while Alt Nation began championing Wild Cub as DJ Jeff Regan independently added “Thunder Clatter” to heavy rotation. Roughly 18 months since recording the first rough sketches of Youth in that row house in Nashville, Wild Cub headlined a brimming crowd at New York’s Bowery Ballroom after selling out both the Mercury Lounge and Glasslands a few months prior. Next month, Wild Cub will hit the road again for a handful of dates, including two shows supporting Bastille.

Wild Cub will travel to the UK in 2014, where “Thunder Clatter” has made waves on the Spotify Viral and iTunes Top Singles charts after soundtracking a Bose ad. Youth’s wide release through Mom+Pop will also include two bonus tracks, “Blacktide” and “Lies.”