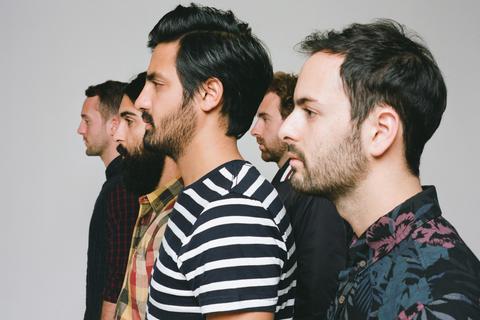 With the breakout success of their self-titled 2010 debut album and widespread acclaim for their exhilarating live shows, Young The Giant has quickly established itself as one of the most exciting new bands to come out of Southern California in recent memory.
For their highly anticipated second album Mind Over Matter (due out January 21st 2014) Young The Giant enlisted Grammy-nominated producer Justin Meldal-Johnsen - known for his work with such diverse artists as Beck, Nine Inch Nails, Paramore, and M83. Featuring the electrifying lead single “It’s About Time,” the collection of songs finds the young band challenging themselves both lyrically and musically. This sophomore release follows the band’s eponymous debut which featured singles such as “Apartment” and the RIAA gold certified hits, “My Body” and “Cough Syrup.” “My Body” was a top 5 hit at Alternative radio and closed 2011 as the year’s fifth most-played song at the format. “Cough Syrup” drew even greater success, peaking at #2 at Alternative, and enjoying crossover chart success at both Hot AC and Triple A radio. Both tracks remain in regular rotation as staples at radio outlets nationwide.
In addition to its popular success, “YOUNG THE GIANT” also drew reams of critical acclaim from outlets such as SPIN, The New Yorker, and The Wall Street Journal which hailed the album as “a pop masterpiece with well-crafted songs, surprising arrangements and soaring vocal harmonies.” “YOUNG THE GIANT” also received rare applause from British musical icon Morrissey, “Every three thousand years, a band comes along who restore that precious component of faith.”
Young The Giant spent much of 2011 and 2012 traveling the globe, with sold out headline tours, and show-stopping appearances at such festivals as Bonnaroo, Austin City Limits, and Lollapalooza. A dynamic and distinctive live act, the band also made a range of high profile TV performances, spanning ABC’s Jimmy Kimmel Live!, and NBC’s TODAY and The Tonight Show with Jay Leno to 2011’s MTV Video Music Awards and their own edition of MTV’s Unplugged.