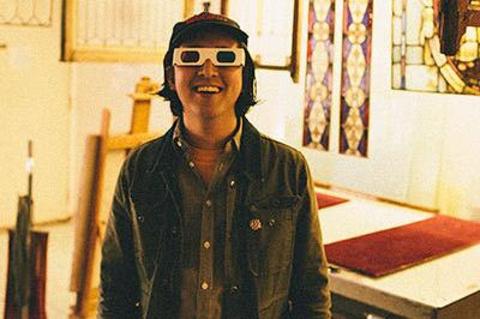 There is strange dissonance resonating in the Chicago-based musician J Fernandez. You might also find it strangely familiar. While his tunes catch you with their impeccable hooks, hypnotic grooves, warm tones, and crafty structures there lies subtle darkness in these songs. Whether it comes from the woozy combo organs fighting frequencies or the bummer lyrics that leave you feeling hollow, Fernandez is grasping for something real. While "nostalgia" is a comfortable word to describe these tunes, not all pop music has to fall into that blasé carefree zone. In fact, that might undermine not only Fernandez's craft but also the amount of painfully, self-conscious awareness that makes his compositions so reflective and true. They are personal tunes but ones crafted so well as to ring in our collective unconscious, instantly begging the question Where have I heard this before?

Having emerged from his bedroom recording studio Fernandez took the project live in late 2012 and has been earning fans in his home town of Chicago playing with the likes of Guards, Advance Base, The Cairo Gang and Free Time as well as appearances at New York's CMJ Music Marathon 2013.

'J. Fernandez draws on the motoric patterns of bands like Stereolab and the shifty meters of progressive rock in songs that were modest on the surface but gently insistent. Proudly intelligent indie-rock' - New York Times

'"No Luck" is a mellow, mournful track, highlighting Fernandez' falsetto and culminating in a minimal sax solo.' - Pitchfork

'The “Fall in love” refrain in J Fernandez's Real Flowers is truly ominous, but creepy lyrics when buried inside a bedroom recording as beautifully constructed as this are needed to stop things getting too cozy. The analog synth coaxes the dark taint along further, off-key notes breaking the comforting, hazier bed this track rests upon. This is why I love Real Flowers—not everything has to exist in the land of twee and sparkly joy just because it’s not punk or noise.' - Noisey

'J Fernandez makes music of almost naive purity, hinting at a rich vein of smart pop, from The Byrds to Stereolab to Shuggie Otis. Drift away in this lovely album' - Dazed and Confused

'Fernandez has an array of sound and flexible ideas that make him a must-watch. Like, moving to Chicago and stalking him.' Tiny Mixtapes

'Each creation he reveals is better than the last' - Dummy