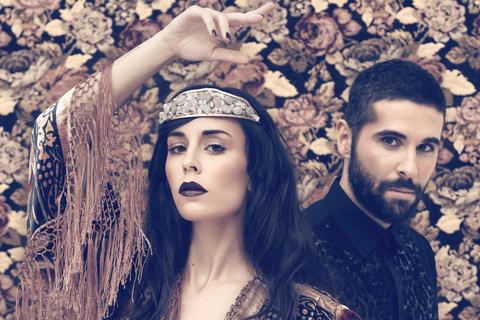 Fuel Fandango is a duo formed by Ale and Nita, a duo that creates a perfect mix of electronic beats, rock guitars, pop melodies and flemenco aesthetics.
Ale Acosta, is a DJ and a producer and has an outstanding career as such. He was nominated in 2008 for “Producer of the year” at the Latin Grammy Awards and at the Spanish Music Awards.
Nita is the other half, the frontwoman, a young singer with much experience. She started at a young age singing Spanish “copla” and different styles of flamenco. She now changes from Spanish to English, naturally, the same way she changes from soul to flamenco. She´s pure fire on stage.

After a successful self-titled debut album (2010) with which they introduced themselves to the Spanish crowd and to different European countries, Fuel Fandango released in April 2013 their second LP Trece Lunas. With this album they have continued with a unique fusion style and have proven to be one of Spain´s finest acts.

Since 2009, Fuel Fandango have offerred over 200 shows in 12 countries. These shows include international festivals such as Eurosonic, Solidays, Arezzo Wave, United Islands, Les Transmusicales, and many more.