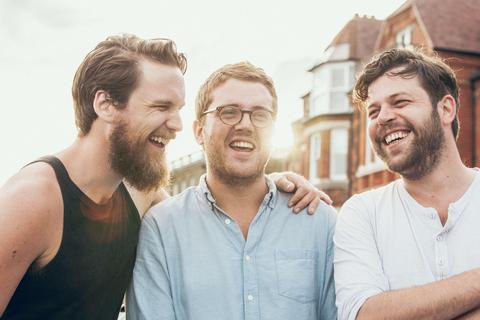 Bear’s Den follows in the footsteps of several other notable British success stories, including Ben Howard, Michael Kiwanuka, Daughter and more. The critically acclaimed trio has developed a cult following in its short existence as a result of their writing, harmonies, and D.I.Y. approach with custom hand-stamped CDs. Of Bear’s Den, Ben Lovett of Mumford and Sons/Communion explains, “Their music connects with people immediately, in a way I very rarely see. They play sold out rooms across the country and have built their career in the hardest way, through touring...”. The London-based trio played music in various incarnations before officially forming the band in 2012. They quickly gained a host of fans and began touring extensively, including support slots with Of Monsters and Men, Ben Howard and Matt Corby among others. It was only after finding their identity on the road that the band focused their attention on studio recordings.