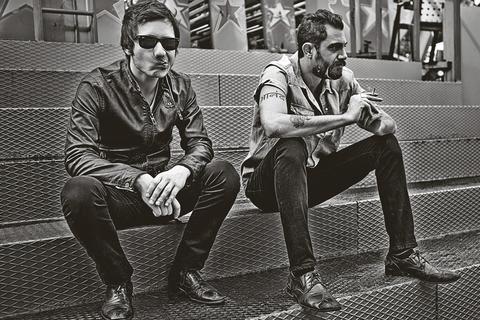 The Wanton Bishops are a two-piece blues and garage rock revival band from Beirut, Lebanon. The band is made up of Nader (vocals, harmonica, guitar, keyboards) and Eddy (guitar, backing vocals, banjo), who are joined on stage and in the studio by a hired drummer and a bassist.

Nader met Eddy in a blues bar in Beirut a couple of years ago. Well, technically, they met outside the bar on the sidewalk in the middle of a fistfight. Luckily, they weren’t punching each other, and their friendship developed over cheap tequila. They eventually decided to form a band together.

Eddy is influenced by stuff like the Rolling Stones, The Kinks, Oasis and the Arctic Monkeys, while Nader is more of a Muddy Waters, RL Burnside and Seasick Steve kind of man. They both agree on The Black Keys and Black Rebel Motorcycle Club.

Finding common ground between stompy swamp blues and rock riffs, between acoustic and electric sounds, between garage rock and the blues, that’s where the Wanton Bishops have found their voice, and that’s where they’re at their best. Actually, where they’re really at their best is live. But that’s not something you should be reading, that’s something you should experience for yourself. Between Nader’s guttural voice and his wailing harmonica, and Eddy’s rhythmic riffs, between the stomping, and the strings snapping on abused guitars, you’ll understand that there’s something there in the rawness of it all.

The Wanton Bishops released their debut album “Sleep With The Lights On” in December 2012, and in the year since they handed out bootleg EPs in a dive bar in Beirut, they’ve toured in Turkey, France, Norway, Sweden, and Denmark, as well as supported Guns N’ Roses and Lana Del Rey in Lebanon.

Sleep With The Lights on is available on iTunes, Spotify, and a whole bunch of other places online.

The show at Lit Lounge Upstairs on Friday, March 14

⋆ 1:00AM The Technicolors