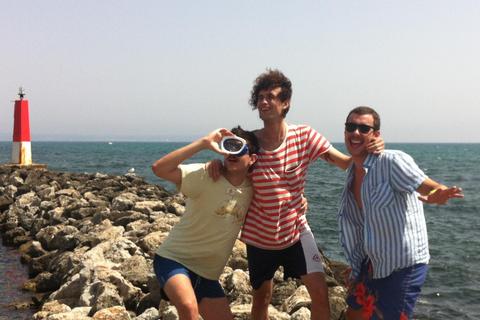 The Parrots is a fresh-from-college young garage-surf trio from Madrid that’s causing a commotion in the Spanish scene this year.
They only have one sef-released demo out yet, but the title track has already 16.500 views on YouTube and shows a band that knows how to have fun playing great music.

In September they recorded two tracks with legendary Spanish producer Paco Loco (The Posies, Las Kellies, The Sadies, The Jayhawks...) for a forthcoming 7", and in July they recorded two other tracks for another 7" (of immediate release) with Aaron Bastinelli in Amsterdam, at Converse’s Rubber Tracks Studios.

Their fresh sound, reminding of American bands such as Black Lips or Strange Boys, got them invitations to perform at the main Spanish festivals in the summer of 2013: FIB Benicassim, SOS 4.8, Arenal Sound... In september they also played with Canadian band Dead Ghosts, who said they had been the best act they had shared a stage with in their European tour.

The Parrots are just starting their career, but the buzz about them has crossed the Spanish borders and is quickly spreading around the world.
Don’t get left behind!

The show at Lit Lounge Upstairs on Friday, March 14

⋆ 1:00AM The Technicolors