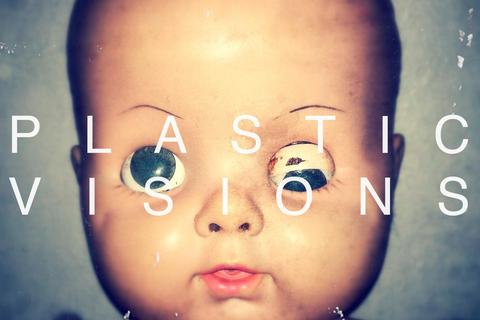 Plastic Visions is a creation from the mind of California native and frontman Kane Stewart. Upon moving to Nashville Stewart enlisted the help of his cousin, Brad Shultz, for production of his project and just some all around family love. With that came the self-titled debut EP from Plastic Visions. Stewart has taken his act on the road with members Sam Haley, lead guitarist and Wildman and Boom on drums. Sam Halen’s sketchy guitar tones and blown out fuzz lead the way for Stewart’s captivating intensity and rubber band like mentality. The sound is a combination of melodic punk anthems and heavy grunge rock. Plastic Visions is currently touring in support of their 5-song debut EP out now on Death Panda Records.

“Like a rocket-powered surf board, “Love Hate” blasts forward with thick, pulsating guitars and waves of noisy effects piggybacking off Stewart’s hoarse yelps. “Now I Know” condenses the dissonance into random interludes, making the quieter parts more poppy and the rest a raging mess of unceasing, feedback-powered anarchy.”-Consequence of Sound

“Plastic Visions, is a no-nonsense rock and roll effort that captures the frenetic-yet-poppy attitude of Nirvana and The Pixies, courtesy of Brad Shultz’s playing, and meshes it with Kane Stewart’s Californian surf-rock attitude.”-Alternative Nation

“Stewart pinballed around the stage like a madman, wailing punk anthems off his band's debut EP (like “Bitch This Ain't L.A.” and “Kamikaze,” for instance) and throwing himself around like rag doll. Truly, The Spin hasn't seen that kind of mad punk glee from a frontman since the last Titus Andronicus show we saw.”-Nashville Scene

The show at Lit Lounge Upstairs on Thursday, March 13