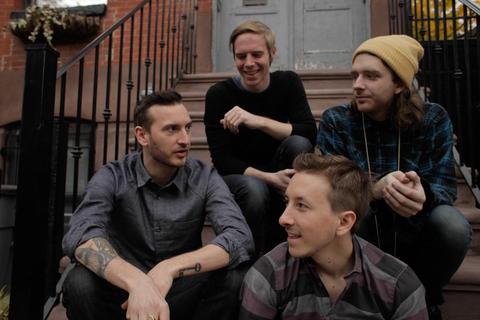 Bear Hands are a textbook example of contrasting personalities uniting to craft something more than the sum of their parts. Vocalist/guitarist Dylan Rau, the Brooklyn-based quartet’s self-confessed musical Luddite (“I can’t read music, but that’s ok because I’m more of an ideas man,”) peppers his supersonic chatter with an infectious collection of witticisms. By contrast his songwriting partner, guitarist Ted Feldman, grew up playing the cello and carefully selects his answers, admitting to being “a bit of a control freak.”

Together, these contradictory characters have combined their strengths to deliver their sophomore album Distraction – a collection in which their love of pop hooks is filtered cohesively through an eclectic collection of genre elements ranging from psychedelic to punk. “Giants” is perhaps the track that best encapsulates everything that makes Bear Hands special, as it flows from a manic verse full of hollered stream-of-consciousness lyrics into an infectious chorus, in which the universal emotion of “I’m loving you more” is set to a cascading riff.

Rau and Feldman first met as film students at Connecticut’s Wesleyan University, an institution that has become well known for turning out a steady stream of talented musicians due to its focus on the arts. They became fast friends, bonding over a pot brownie and a shared taste in music. However, as Feldman was already in another band at the time, it would be several months before the two would begin to collaborate musically.

After going through an unpleasant breakup, Dylan discovered that his ex-girlfriend had taken up with one of Ted’s bandmates. When he found out that the band had also been offered a record deal, Dylan decided that they would not ride off into the sunset with both his ex-girlfriend and the guitarist he wanted to join forces with. “I said, ‘this isn’t how I’m going to go down.’ I confronted Ted and said, ‘Alright, that’s it – we’re starting a band!’” Once Ted had been convinced to abandon his previous band and form a new one with Dylan, it was time to complete the lineup.

Rau quickly identified the ideal rhythm section for his new band: bassist Val Loper and drummer TJ Orscher of Glastonbury, CT’s In Pieces. “TJ was definitely one of the best drummers in the area,” explains Rau. “I remember Val playing a show at my school, and him spinning around really, really fast and getting his bass stuck in the ground, and then he tripped over it and knocked over a PA speaker. It was super boss.”

Knowing that he’d need to recruit them as a team, Rau used some mini-Machiavellian tricks to convince each member that the other was already interested. Once they’d come around to the idea, the first session together displayed an almost telepathic connection. As Feldman remembers: “Everyone was pretty surprised at how easily it came together. We put four songs together in the first two rehearsals. In retrospect, it was our honeymoon period."

After Rau’s master plan came together (“You’ve got to poach people from other bands – you scout them and pick people off like weak antelope”), Bear Hands signed to indie label Cantora Records. Bear Hands’ debut album Burning Bush Supper Club was released in 2010, but their progress faltered due to legal complications and daily distractions. This, combined with some inspiration from Jonathan Lethem’s novel Chronic City, led to the band naming their new album Distraction. “It’s about losing touch with reality,” states Rau. “Many things distract us: doing drugs; drinking; reality television; good food; the Internet.”

Frustrated by this protracted hiatus, Bear Hands decided to take the initiative and fund the making of Distraction themselves. Working on a tight budget meant that Feldman, already the director of the band’s videos, would also take the role of producer, with engineering assistance courtesy of their friends Yale Yng-Wong and Jake Aron. To record the drums and the basic tracks, they headed to Feldman’s parents’ house, which was transformed into a makeshift studio for a week. “Luckily my parents weren't there because they probably would’ve freaked out. It looked awesome to me, but maybe not their style,” laughs Feldman. Overdubs and vocals were completed at Yng-Wong’s studio, Doctor Wu’s, in Brooklyn.

Numerous songs on the album are based on real life experiences. “Agora” addresses Rau’s experiences with agoraphobia. “Mixed with a couple of other mental health issues, it was pretty bad,” he admits. “I still have trouble and I have to force myself to leave the house. Socializing and exercise are the two things that I’m trying to work on improving. Sometimes I have little interest in either.”

Another common theme is failing romance. “Thought Wrong” is based upon a time when two of the band members were simultaneously involved in intense break-ups, while “Vile Iowa” reflects Rau’s experiences visiting his ex-girlfriend’s family – conservative, teetotaller Mormons. “I don’t think they really liked me and I don’t think they trusted me,” he sighs. “I have a history of dating girls from the Midwest whose families don’t like me. It’s a habit I need to get over.”

With character, creativity and pure songmanship in abundance, the global appeal of Distraction should ensure that Rau will have a new chance to broaden his horizons way beyond the Midwest. “We’ve always aimed to write pop songs because that’s just what we like, but we also like all sorts of different styles,” affirms Feldman. “There hasn’t been a huge paradigm shift in genres. I think it’s been an evolution of quality.”