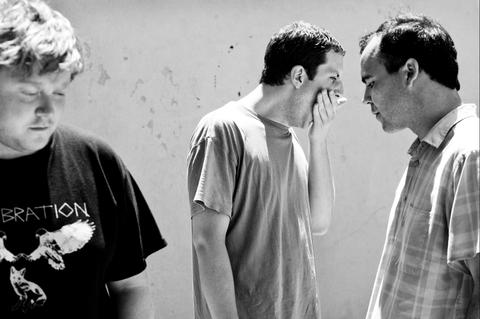 Future Islands' romantic synth sound scales new heights with On the Water, the Baltimore trio's most ambitious and fully realized statement yet. Built around a song cycle exploring love, loss, and memory, their latest album finds the band continuing to deliver pounding rhythms, swelling melodies, and undeniable hooks - but finding new ways to probe inner space and tug at hearts.
Convening in March 2011 in Elizabeth City, NC's historic, waterfront Andrew S. Sanders House, vocalist Samuel T. Herring, bassist William Cashion, and keyboardist Gerrit Welmers lived together in a space that served as both studio and sleeping quarters. The band used this tranquil retreat to refine their most reflective and mature batch of songs to date, adding new material in the process.

What emerged is a lush yet visceral album about two parallel journeys--one physical and one psychological. On the Water's narrator offers enough detail that their story feels personal, yet open enough that any listener can inhabit each twist and emotional pang as their own. Travelling on foot, we seek something - an exorcism, an epiphany, an ending. Memories wash across us as in life: nonlinear, linked by emotional resonance rather than conventional chronology. And so, the pain of letting go channeled by "The Great Fire" collides with a moment's fleeting serenity in the Eno-esque "Open"; the triumphant rallying cry "Give Us the Wind, " despite its confident declaration of individual strength, remains a mile away from final chapter "Tybee Island." It is there the song cycle ends, and what is discovered in "Tybee Island" will be as different as the lives lived by each person who finds their way to this album.

On the Water may unearth aural memories as well. The mind may flash upon our first encounters with New Order's "Ceremony," David Bowie's "Heroes," or The Cure's Disintegration, memories which, are continually reborn and reimagined in the context of the here and now. And as the song-cycle's narrator comes to terms with his own memories, his singular journey collapses into the collective experience of album-closer "Grease." It is here that the "I" of the nine previous songs collapses into the "we" of Future Islands, now singing the literal journey of the people who came together by the ocean to deliver these songs into our ears.

Far from just a narrative trope, the ocean played an integral role in On the Water's creation. The bulk of the album was recorded with waves pounding sand mere feet away. The album opens and closes with field recordings made by the band on a nearby dock, and one pivotal track, "Tybee Island," began with vocals recorded on the beach (subsequently fleshed out in the studio with additional instrumentation). The ocean inhabits every note of these songs. On the Water is an addictive ride that demands repeat listens, eagerly awaiting the test of time. To produce these results, Future Islands fleshed out its sound with the additions of cello, violin, marimba, and field recordings. As with their 2010 breakthrough album In Evening Air, On the Water was produced by frequent collaborator Chester Endersby Gwazda, perhaps best known as producer of Dan Deacon's Bromst. Noted guests include Wye Oak's Jenn Wasner, who provides vocals on "The Great Fire," and Double Dagger's Denny Bowen on live drums and additional percussion.

For all its undeniable weight, On the Water is not a sullen concept album. Every track on the record works both as a contribution to the whole and as a stand-alone pleasure, evident in the insistent throbs, addictive melodies, and stirring vocals of tracks like "Close to None," "Balance," and first single "Before the Bridge."

Make no mistake, On the Water is a record that aims to both break your heart and heal your wounds.