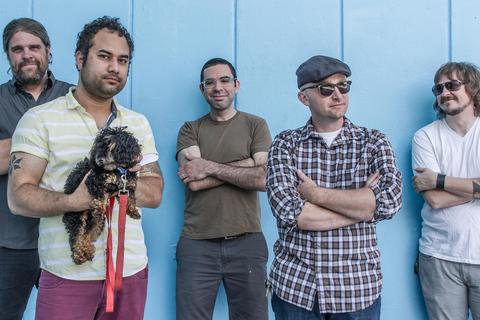 Listen to Tropics Of The Sand (feat Kelley Deal)

Put simply, Motel Beds is a rock band from Dayton, Ohio and that means certain things to certain people...

Yes, they release albums faster than most bands book shows.

Yes, the songs are catchy, guitar-driven and often shorter than three minutes. And finally yes, one of them has played with Robert Pollard.

They have been together in various permutations since the proto-blog days of 2003, when their first ep “Hasta Mañana” garnered positive feedback and a track (Laugh Until You Die) was included on the first volume of the popular series “The Artist’s Den.”

Time passed, as it must. The band solidified their current line-up of Tommy Cooper (guitar), Ian Kaplan (drums), PJ Paslosky (vocals), Darryl Robbins (guitar) and Tod Weidner (bass) while managing to write and record three albums between 2009-2010: “Go For a Dive,” “Moondazed,” and their first full-length, “Feelings.”

Like men possessed, they continued to write and record, releasing the critically-acclaimed full-length albums “Sunfried Dreams” in March 2011 and “Tango Boys” in December 2011.

“Tango Boys” included the band’s first break through hit with “Tropics of the Sand,” a duet with Kelley Deal (The Breeders), which was played extensively on Sirius XM, nationwide on terrestrial radio stations, and was hand-picked by CMJ staff to be on the 2011 CMJ Mixtape compilation. This recognition lead to performances at 2011’s CMJ Music Marathon, 2012’s SXSW and a number of club dates across the country.

Showing no signs of slowing down, the band released their latest full-length, “Dumb Gold,” in November 2012 on Chapel Hill, NC’s No More Fake Labels. Reflecting the maturity of a band first given time to progress outside of the chew ’em up and spit ’em out current media atmosphere, “Dumb Gold” shows remarkable versatility and cohesion for its 10 tracks. British invasion, surf-toned riffs, Television and an early CBGB’s aesthetic that’s angular but not aloof; good, stripped down rock’s hard to describe. Thankfully that’s your job.

The show at Lamberts on Friday, March 14