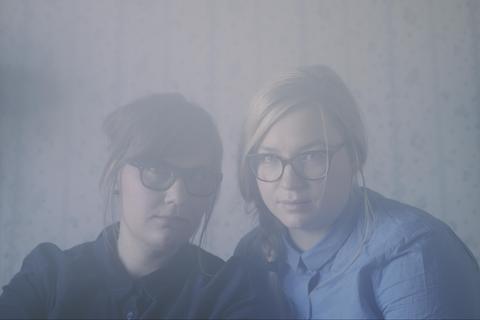 First recognised for their work alongside Anna Tomlin and Rebecka Kristiansson with the Swedish four piece Audrey, Emelie Molin and Victoria Skoglund have long been musical partners since the band's formation back in 2002. Departing for the folksier sounds of their new moniker Mire Kay; releasing the delicate five-track EP Fortress in 2011; they return with a full length under the same alias: their debut LP entitled A Rising Tide Lifts All Boats.

Recorded by Fredrik Karlsson and Emil Isaksson at Studio Möllan in Malmö, Sweden last year the album mixes stripped down songs of a fragility and introversion with more musically experimental arrangements. Mixed in the US by the masterful hands of Tom Herbers, whose previous work includes the similarly creative chamber-pop of Dark Dark Dark and Andrew Bird, the production allows the often sparse sounds to take place and stand out amongst the moody Scandinavian landscapes of darkness and beauty they conjure. The world of Mire Kay is one of simplicity and sadness, charm and childhood; that connection we all make between emotion and memory. Certainly there is a parting of the dark clouds that quilted the post-rock tinged chamber-pop of Audrey's music, with Mire Kay treading a rural path searching for that hopeful core at the hearts of these 11 songs.

It is this honesty and simplicity which makes the songwriting so compelling, with the vocals stark again a stripped background, unashamed and bold. While rich and full layers of instrumentation, from the characteristic lap steel of Johan Björklund, to Albin Johansson's twinkling piano and Ola Lindgren's bass and subtle percussions, cocoon these personal tales which chart Emelie and Victoria's past two years. From opener 'Beat' with its deep cello accompaniments and glittering ivories through to the weightier sonic experimentations of 'Reverse', on to the wondrous natural imagery of 'Birds' and the A-side closer 'Winding' with its childhood memories tucked at its core A Rising Tide Lifts All Boats is both as gloomy and yet optimistic as its title suggests.