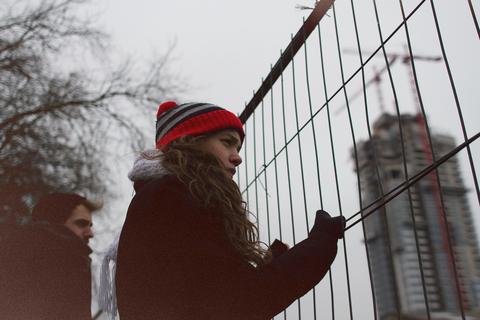 Odes to some far and vague past, attended by grey organs and old strings, delivered by a horn and raw electronica. That cool quiet just before faith hits. However filled with suppressed nostalgia, they keep looking towards the future. They, that's Float Fall.
A duo that succeeds in taming the silence and dreaming dreams until everything turns out all right just once more. Rozanne Descheemaekers' voice guides you straight through the freezing tracks, but afterwards quietly snuggles up to the hoarse vocals of Ruben Lefever.
Float Fall's songs make you move into another world, one lacking any final description, but a good place to be nonetheless. A place where the dull rustle of the past gets its second chance. Right up to the moment that dream and reality collide.

— Disco Naïveté — The lovely Someday sees Rozanne and Ruben combine a subtle electronic production with guitar strips, whilst they sing back and forth about love in a The xx-like way.

— Indie Shuffle — As soon as you get about one minute into the song, the two vocalists key in layers of beats that play off of their whimsy, creating this outer layer of atmospherics that intertwine quite gorgeously into one another. It’s clear that Float Fall has a bright future ahead and I for one am excited to see what’s next from these two.

— Q Magazine — Track of the day: this is the band's debut single, which is being released for Record Store Day.

— The Line Of Best FIt — Plinking piano notes, teasing electronic flourishes and gentle whispers introduce us to Float Fall’s world of secretive dream-pop. Minimalist clandestine duets have become synonymous with Romy and Oliver; though competition at the top just got that little bit healthier.

— Pigeons & Planes — When they took the stage at New York's Full Moon Festival, it was clear that they would soon become popular on American soil.

— PerezHilton.com - You will really dig this.