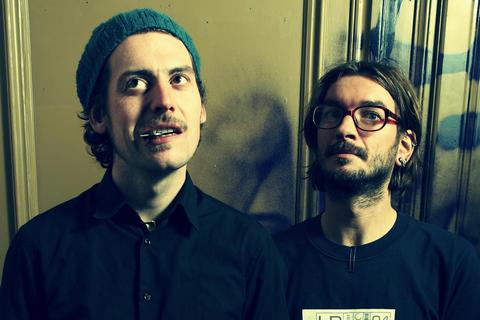 The band Dÿse is a duo consisting of Andrej Dietrich (guitar, vocals) and Jarii van Gohl (drums, vocals), originally established in Amsterdam in 2003. There they released their first single "Honig".
The release was also the starting shot for the success story of an East German band, whose energetic shows in Europe and Asia established the name Dÿse as a trademark for authentic and innovative music to this day. No superlatives, no exaggerations. Dÿse is what Dÿse is. A band, whose music and live performance wins people over. The sound of Dÿse is recognizable by dynamic rhythms and hearty guitar riffs.

Unconventional songwriting and stop & go arrangements are also typical for Dÿse. Rather than using a music genre Dÿse focuses on producing their own sound: always cross-genre, loud, soft, fast, slow, surprising, fresh and above all: always uncompromising.
With its significant recent album "Lieder sind Brüder der Revolution" (2009), the band gave life to a piece of music which deserves a clear exclamation mark and proves that genius and madness are often close together. Rock, Jazz, Hip Hop, Punk, drum and bass, noise rock, etc. - Dÿse decomposes these diverse music genres, and puts them back together into complex, but harmonious compositions. The album continues to impress to this day and has expanded the fan base considerably.

After several singles, long-players and about 500 performances, Dÿse is now waiting in the wings with their third Album. "DAS NATION" is another step towards worldwide fame. Ten new songs are ready for the good listening ears of the world. Uncompromising as always, but clearly matured, pieces such as "Waldbart" and "Sie ist Maschin" open up new doors in the Dÿse-universe. Intricate rhythms, fat groove passages and orchestral passages make this album a musical adventure, which can not be easily forgotten. "DAS NATION" embodies the current state of Dÿse.

Serious sailor ballads packaged into crashing noise punk rock make one curious about the next direction of the creative duo. "DAS NATION" will be released in March 2014. Along with the publication there will be a video production, their internet presence will get a new design, artwork, merchandise and press images will be updated, and the tour planning has begun. This means Dÿse will be live again full throttle from March 14, defending the title of "The Best Live Band in Europe."