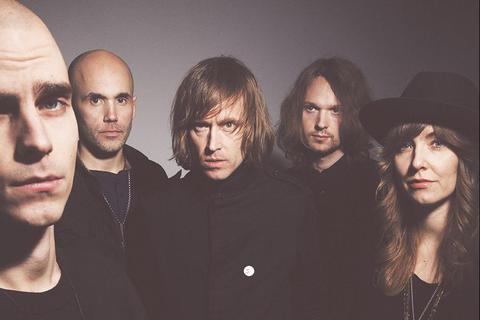 INVSN (pronounced “invasion”) was birthed from the subcultural landscape, imbued with the passionate spirit of hardcore-punk and emboldened by the rich history of rock n’ roll. The Swedish band released a couple of records in their native tongue, under the name Invasionen, before deciding to “invade” the rest of the world with their English language debut. This embryonic period allowed them to steadily develop a sound that delivers subversively deliberate pop through a post-punk lens.

INVSN’s Invsn embodies elements of Joy Division, Echo & The Bunnymen, lesser known seminal UK band The Sound, early outings from The Cure and modern acts like The XX and Soft Moon, all through the prism of people who loved Black Flag growing up. It’s no wonder the band have managed to create something refreshingly new from classic elements of the past: members of INVSN spent time in the tirelessly revered Refused, garage revivalists The (International) Noise Conspiracy and thrashers D.S.-13.

The record was created at Stockholm’s Studio Ingrid (formerly Polar Studios), with mixing duties handled by English album producer Nick Launay, whose distinguished credits include INVSN reference points like Public Image Ltd., Nick Cave, Siouxsie and the Banshees and The Church. Launay shares mixing credit with Danish producer Jacob Hansen, who has worked with Volbeat since their early demo days.

The transcendent, atmospheric and consistently engaging songs on INVSN’s self-titled debut recall the strongest elements of ‘70’s psych and ‘80s New Wave, with hints of each decade that followed and a forward-thinking vision of the future. The end result is a sound that is at once both timeless and nostalgic. The world doesn’t even realize how ready it is for this album. And that’s OK. This group of musicians is used to being ahead of their time; they don’t plan it that way, they just can’t help it.

The creative impulses that have driven the members of INVSN since they began playing music have carried each of them aloft like a mythical muse, often forsaking careerism for the sake of authentic realism. By the time the world realized that frontman Dennis Lyxzén’s former band, Refused, had defined a generation, they were gone. In the wake of Refused’s three-album career, a multitude of bands traded on much of their innovative sound, attitude and image to gain fame and fortune.

When The Shape of Punk to Come was reissued more than a decade after its initial release, Pitchfork raved about its power and unique mystique. Rock Sound gave it a 10/10. Kerrang! had already put it in their “50 Most Influential Albums of All Time.” But when people were catching up to Refused after their split, Lyxzén had moved on, fronting garage rock obsessed art-rock provocateurs The (International) Noise Conspiracy. Rick Rubin, whose resume contains no shortage of icons and innovators, produced (I)NC.’s last two albums and released them through American Recordings. (I)NC. wore their progressive politics on their proverbial sleeves, paving the way for a so-called “Return of Rock” that resulted in huge commercial success for other bands.

After a 12 year run, (I)NC. took a break that became an extended hiatus. Lyxzén played in the power-pop group The Lost Patrol Band. Lyxzén and his friends remain one step ahead, with the stars about to align for the first time between inception and acceptance through INVSN. The members of INVSN came together organically, a group of friends determined to make the type of music they themselves wanted to hear. Lyxzén is joined in INVSN by (I)NC. bandmate Sara Almgren (who has played with the punk band Masshysteri), Andre Sandström (DS-13), Anders Stenberg (who has worked with Swedish pop star LYKKE LI) and their friend Richard Österman. Lyxzén, Sandström and Stenberg have played together since 2004. During (I)NC., this was the fun side project. It eventually just took over, after a few hundred shows and five years of playing together, giving them an edge over newer acts who often sprout out of nowhere and immediately are signed.

“#61” opens the album and reminds listeners that music can be a world-changing force, starting at the individual level. Don’t give up on radical politics, on innovative culture, whatever has moved you inside. It’s an angry song that rails against the idea of music being relegated to a background playlist or soundtrack to a club. “Vaesterbotten” captures the darkness of the wintery area near where the band calls home, opening sparsely and gradually building up in instrumentation. It’s about ending up in a place like “Vaesterbotten,” a place criminally underappreciated. “Our Blood” was laid down in one take and milks a few chords to maximum potential; a simple change in bass line or other slight movements altering the mood tremendously. Album closer “Hate” is an anthem for the world’s misfits, picked upon outcasts and bullied kids. It’s a call to arms to let that energy become empowering.

It’s rare that a band sets out to become trailblazers, architects of a new sound or otherwise massively influential and acclaimed. Many are often imitating some sort of formula. Others who do aspire to greatness are often doomed to fail thanks to the limitations of their own creativity, or will flameout after some fleeting commercial success. But like the handful of iconic tastemakers whose legacies have stood the test of time, INVSN is doing it for the right reasons. This will ensure a body of work that will endure, that will continually inspire, striking a special chord around the world, igniting that same fire that caused INVSN’s members to make their first noise.