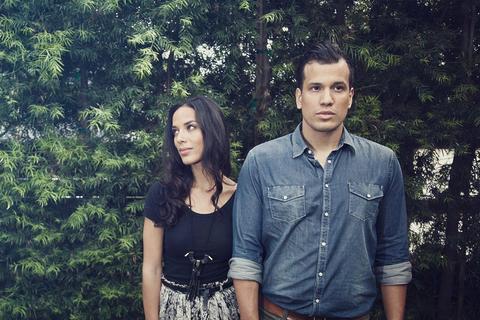 There are approximately 2,000 miles between Nashville and Los Angeles. Both cities are home to JOHNNYSWIM. However, the duo's music far transcends that distance. It's easy to understand why A Prairie Home Companion declared
that Abner Ramirez and Amanda Sudano Ramirez are "21st century troubadours." As JOHNNYSWIM, they embody the tradition of the well-traveled singer- songwriter while cultivating a modern style that's uniquely their own.
Heart Beats, the duo's debut for Big Picnic Records, is the culmination of years spent shaping what Vogue calls an "infectious sound." Of the 200-plus acts who performed at the 2013 Bonnaroo festival, only JOHNNYSWIM could naturally conjure elements of rock, blues,
boleros, folk, and contemporary R&B in their music. With just a guitar and the scintillating contrast of their voices, the duo holds audiences spellbound. They are storytellers who create a sense of intimacy between them and the listener, whether performing on The Today Show, singing 333 feet underground in Tennessee's Cumberland Caverns, or illuminating the stage at O2 Shepherd's Bush Empire in London. Their songs are shaped by universal truths. "It starts with a feeling we hope the listener will get when they hear the song," explains Abner about their songwriting process. "Sometimes it starts with a lyric, sometimes with a chord progression, or sometimes even with a picture, but ultimately we start with an emotion."
Abner and Amanda formed JOHNNYSWIM in Music City, USA. The son of immigrants who fled Cuba for the southeast, Abner had moved to Nashville to study and pursue music while Amanda's family settled in Nashville after moving between Los Angeles and the northeast. Both inherited strong musical influences from their parents and both were driven by a desire to chart their own path in music. Abner attempted a solo career with a record label and Amanda had done some recording in New York but neither course was creatively satisfying. And then they met each other in 2005.
Fueled by Nashville's fervent music scene, the two began writing songs that drew from and augmented each other's musical strengths. "Nashville was our incubator," says Amanda. "It was a creative cocoon that allowed us to get out whatever was in us without the need to be 'successful.' It developed us in the best way. In Nashville, I met so many amazing musicians who could care less if anyone ever knew their name. They loved music and that was that. It was so refreshing." Adopting the name JOHNNYSWIM, the duo self-released their debut EP 1-4 in 2008. A year later, Abner and Amanda got married and relocated to Los Angeles.
Their move to the west coast spawned another EP 5-8 (2010) along with the release of the "Bonsoir" / "Good News" single. They began to tour the U.S. and completed residences at Hotel Café in Los Angeles and Rockwood Music Hall in New York. Inspired by a whole new community of songwriters and musicians, JOHNNYSWIM began working on their third EP. Ironically, the first country song they ever wrote was penned in LA rather than Nashville. Long a staple of their live set, the tune became the title track of Home, Vol. 1 (2012). With a striking visual style complementing the raw yet soulful edge of their music, JOHNNYSWIM found fans in the fashion industry and were invited to perform at events for Levi's, Louis Vuitton, and Tommy
 
 Hilfiger. Their videos for "Bonsoir" and "Annie" evinced the emotional thrust of their music and revealed how well their magnetizing stage presence translated to the screen.
In between touring and recording, the duo teamed up with non-profit organizations like Visiting Orphans and Got Your Back Movement, whose charitable efforts serve a number of communities around the world. Abner and Amanda explain, "Humanitarian work was something we both have done separately for years, so when we met and started singing together it came really naturally to look for places where we could serve. It’s as important to us as anything else we do, and we’ve found that if you’re willing to go, willing to serve, willing to give, the opportunities to do so will arise. The cliché is 100% true: you always come home having received so much more than you feel like you gave." That spirit of giving has inspired some of JOHNNYSWIM's most compelling compositions, including the rousing, inspirational "Hallelujah." The duo donates each sale of the song to Visiting Orphans.
Courted by a number of record labels, JOHNNYSWIM signed with Sony/RED-distributed Big Picnic Records in 2013. The partnership was struck at the end of a hugely prolific period for the duo that included starring roles in a Nashville production of Smokey Joe's Café and a spot on the Old Crow Medicine Show's sold-out tour of the U.K. Since then, they've performed at MTV's 2013 O Music Awards in Times Square while their songs have appeared in episodes of VH1's Mob Wives and Black Ink Crew.
Above all, the love of writing, recording, and performing informs each new JOHNNYSWIM project. Largely recorded and produced at their home, Heart Beats exhibits the duo's ever-expanding stylistic range. Issued as a single and video, the self-penned title track is accompanied by Abner and Amanda's collaborations with fellow Nashville/LA transplants Josiah Bell and Britten Newbill. Co-written and co-produced with Bell, "Don't Let It Get You Down" exemplifies JOHNNYSWIM's ability to render anthem-like melodies that immediately hook and bring audiences to their feet. "Nashvillians love good songs," says Amanda, and Heart Beats is certainly full of them. Slating their first full-length album for 2014, the duo has many more stories to share. No matter what JOHNNYSWIM writes or where they perform, the excellence of their craft infuses every note.
***
For more information, please contact
Cami Opere, Mary Moyer or Carla Sacks at Sacks & Co., 212.741.1000, cami.opere@sacksco.com, mary@sacksco.com or carla@sacksco.com.