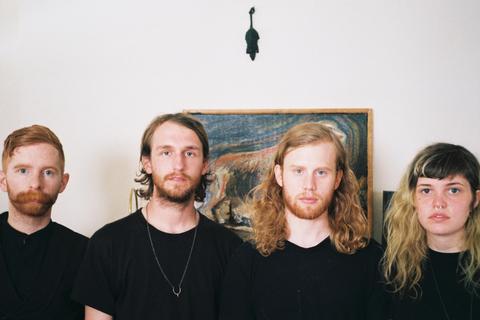 Saintseneca is a young band from Columbus Ohio led by singer-songwriter and multi instrumentalist Zac Little. The group utilizes a wide range of acoustic instrumentation (violin, mandolin, dulcimer, Turkish Baglama, floor percussion) with more contemporary elements such as synthesizers and electric guitars to create a unique merging of rustic and modern. Elements of folk and country music converge seamlessly with soaring vocals and a vibrant post-punk energy in an intensely evocative sound.

While the group formed in Columbus Ohio, Saintseneca's songwriter Little hails from the rural hills of Appalachia. It is a solitary landscape that has infused the group's songs with themes of introspection and alienation. “I was raised on farms in Appalachia, “Little explains, “I think that my perspective on music was shaped by where I grew up. It was twenty minutes to see the nearest person. And being so isolated plays a huge role in what I write about”

Saintseneca's latest album Dark Arc is informed by change. While previous records documented the band's celebrated live show, the new record is the result of both a revamped lineup and a dramatically expanded recording process. “We initially recorded in a friend's attic,” Little says. “I wanted to push that idea as far as we could. And after nine months the computer was so full it wouldn’t run anymore.” The band then reconvened at the Nebraska recording studio of renowned producer Mike Mogis (Bright Eyes) to mix and re record the tracks. “We got to revisit the songs with a completely fresh perspective. It went from working in the attic of a house to a studio with every instrument at our disposal. I like that the recording pushed us as a band. There are more textures and sounds. I want us to be this minimalist acoustic folk group and I also want us to be a rock band. And I think both those feel true to who we are.”

Dark Arc conveys an exhilarating mix of darkness and light. Lyrics of disintegration play out against arrangements brimming with buoyant folk, post punk and pop. It is a combination powerfully exhibited on the song “Uppercutter.” Inspired by a harrowing newspaper story, the track features a melodic piano and vocal chorus that came to Little in a dream. On the song “Happy Alone” he sings “I'm not one to be three-fourths sore, when I crave a split lip I get it quick, I'd be alone, happy alone” over surging romantic post punk before his bandmates join for a stirring chorus. “I really like the contradiction of songs like that,” Little offers. “Ideas of alienation and solitude set agains this uplifting pop. I actually think there's a lot of joy in this record.”