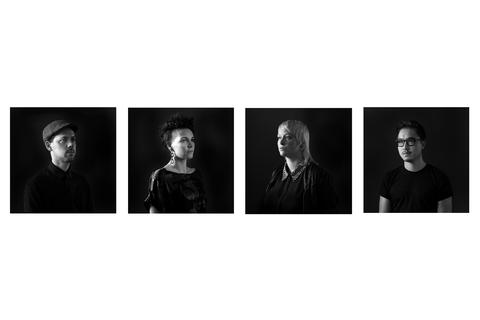 Kill the Hook, Random Recipe’s new album, was released on October 8th via Bonsound. Three years after charming the music scenewith Fold It! Mold It!, their joyous and refreshing debut, the Montreal band returns with a lively pop album, a vibrant blend of hip-hop and electro, and introspective lyrics.
Composed entirely by the four members of the band, Kill the Hook is inspired by their own period of individual, collective and social questioning. The range of emotions felt during the album’s gestation allowed Random Recipe to put their thoughts into words and to redefine their distinctive and authentic sound. Kill the Hook reflects the foursome’s musical evolution in the wake of a 150-date tour. The quartet channelled their high-energy performances into this album, so that it would live on disc and on stage. Therefore, bass, steel drum, synths, Omnichord and other analog instruments come into play on Kill the Hook, resulting in a mix scattered with 90s references. The fruit of humane and artistic encounters, this new Random Recipe album sees the band collaborating with American rapper Fat Tony (A$AP Rocky, Das Racist) and Japanese UHNELLYS.
By creating a coherent fusion of different genres, Random Recipe has embellished their musical landscape with remarkably complex and profound arrangements, without disregarding their usual festive and unpretentious energy. As the new opus suggests, the foursome has more than a few tricks up their sleeves.

ABOUT RANDOM RECIPE
Formed by Frannie Holder, Fab, Vincent Legault and Liu-Kong Ha, the band has toured across Quebec as well as in Canada, France, Belgium, Iceland and United States. In addition to their numerous appearances at the Montreal International Jazz Festival and the Festival d’été de Québec, the quartet has been awarded many prizes for their performances (2011 Miroir for the Best Canadian Artist prize,
RIDEAU’s 2011 Étoiles Galaxie prize, etc.). Following the release of Fold It! Mold It! in September of 2010 in Canada through Bonsound
and in January of 2012 in France via Chapter Two Records, the band was nominated in three categories at the 2011 ADISQ (Album of the
year - Anglophone, Quebec artist of the year - Other languages and Album artwork of the year). Since then, Random Recipe has multiplied
collaborations with widely known artists such as Pierre Lapointe, DJ Champion and Jérôme Minière.