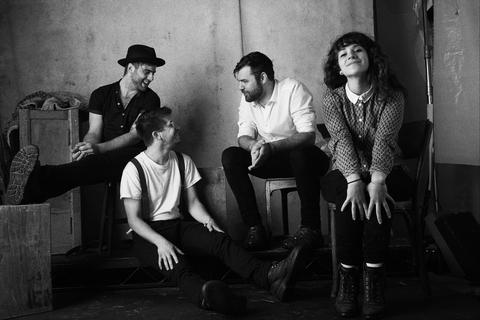 When Adam McHeffey (guitar, banjo, vocals) first heard Kari Spieler (guitar, vocals) in 2009, she was playing a cover of the Jackson 5's “I Want You Back” in their college co-op, where Adam volunteered.

"I thought she sounded amazing, but she was selling her CD for ten dollars, and that was just too much for my wallet."

Though both Adam and Kari performed regularly around the campus of SUNY Purchase College, it wasn't until the final weeks of their senior year that they met in Kari's bedroom and recorded "Johnnie," a song Swear and Shake performs to this day.

The bedroom demo of "Johnnie" began to circulate, finding its way to Shaun Savage (bass) and Thomas Elefante (former drummer), both childhood friends of Adam. That summer, with ever increasing momentum, Swear and Shake recorded their first EP, aptly titled Extended Play. Extensive performing followed the release of Extended Play, playing venues in New York City and Brooklyn, and on the weekends performing to neighboring cities.

Swear and Shake most recently has shared the stage as direct support for The Lumineers, Delta Rae, G Love & Special Sauce and ZZ Ward. Summer 2013 has seen them performing at such festivals as Shaky Knees, Governors Ball, Mountain Jam, Summer Camp. Despite near constant touring, the band has found time to record new material with an expected release in late 2013. The first single from these recordings has already seen the light of day, as Paste Magazine premiered fan favorite “Brother” in May of 2013.

The show at Soho Lounge on Friday, March 14