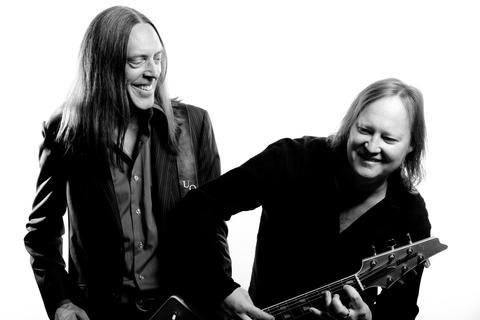 Stylish, retro-’70s outfits, matching medallions, and heavy Cheap Trick homages earned the group a popular following on indie label Touch and Go records. The SuperSonic Storybook and the Stull EP were both underground hits in the early ’90s, before alternative rock became big business.Urge's "The Supersonic Storybook" album is on Spin magazine's 20 Best Albums of 1991, and The Stull EP features the song "Girl, You'll Be A Woman Soon", which was discovered by Quentin Tarantino and immortalized in a seminal scene in the movie "Pulp Fiction."

The Butch Vig-produced “Americruiser” (1990) featured a sound and sense of style that inspired Nirvana and the Smashing Pumpkins to follow suit and use Butch for their subsequent releases, “Nevermind” included.

Urge Overkill has always explored a diversity of styles. 1991′s “The SuperSonic Storybook” had the band re-uniting again with Steve Albini in Chicago. Urge opened for Nirvana on the American and European “Nevermind” tour, and hit the road with Pearl Jam as well during this time, experiencing the 90′s in arena-style.

Urge hired Kramer to produce the 1992 Stull EP, which featured both “Girl, You’ll Be a Woman Soon” and “Goodbye to Guyville,” a kiss-off to the Chicago indie rock scene; Liz Phair would later borrow the term for her acclaimed debut album, Exile in Guyville.

Urge Overkill signed to Geffen Records in 1992- The band’s 1993 major-label debut, “Saturation”, was greeted with strong reviews upon its release. Produced by the Butcher Brothers (Cypress Hill), the album contained songs such as “Sister Havana” , “Positive Bleeding”, and “Back On Me”.

As the band was preparing to record its follow-up to Saturation, Quentin Tarantino picked the group’s cover of “Girl, You’ll Be a Woman Soon” for the soundtrack to his unexpected hit Pulp Fiction. The song and soundtrack became a platinum-selling worldwide hit. (Urge Overkill recently reunited with Tarantino at Tarantino’s Friar’s Club Roast in 2010, playing a set at the Friar’s club and sitting on the podium during the roast alongside Samuel L. Jackson and Uma Thurman.)

Geffen Records 1995′s Exit the Dragon, currently hailed as a 90′s classic, followed “Saturation” and their world-wide acclaim, and the band dropped out for…a while.