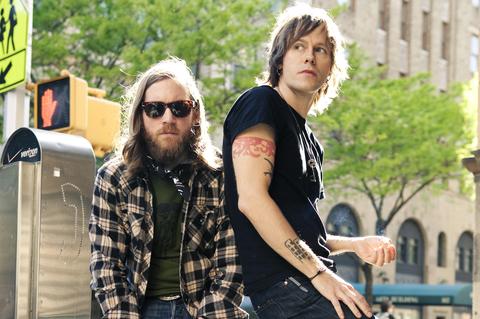 Listen to Long Way Down

2012 was a big year for The Sideshow Tragedy: in addition to continuing their tireless, never-ending tour of The United States, the band also completed their first European tour and released a new record, Persona. Recorded and produced by Austin TX funk outfit T Bird and the Breaks, the LP is the Austin, TX duo’s rawest, bluesiest, dirtiest offering to date.

Like last year’s vinyl-only quickie EP Gasoline, Persona was recorded at Austin’s Big Orange Studio, but this time the band decided to add a few extra ears. With T Bird and the Breaks producing, the band fleshed out the songs in exciting ways, adding unusual percussion and interesting guitar textures, but never sacrificing their trademark rawness and immediacy. Almost all of the songs, including overdubs, are quick and dirty, first take, single takes--you can hear the layers of dirt in the grooves. A collection of raw energy and focused poetry, Persona’s songs are hitched together like old rail cars hurtling non-stop from the Deep South to the East Village.

According to Singleton, “This record isn’t for everyone. I feel like we have artistic impulses that are, career-wise, a little weird. We aren’t self-saboteurs--we would really like to be successful and popular. However, we get really absorbed in writing songs and making records and when it comes time to market and promote it, sometimes we’re like, ‘What have we done?’ We try not to worry too much about it because we are in love with rock and roll, and we just try to make music that moves us. It’s a dedication to making it sound the way we want it sound, to make records we would want to listen to. We just happen to think early Chess records, Exile On Main Street, and Raw Power are the best records ever. It’s hard for us think about it in a pop music sort of way, until it’s too late. Getting rich and famous is a long shot anyway, so you might as well make records that sound good to you.”

Persona is a dark, murky, glorious slab of garage, blues, and rock and roll–The Sideshow Tragedy’s most accomplished record to date. It’s the summation of everything they’ve been working to accomplish since they started the band, and the beginning of everything that’s still to come. Stay tuned.

The show at Headhunters Patio on Tuesday, March 12

12:00AM Kingdom of Suicide Lovers