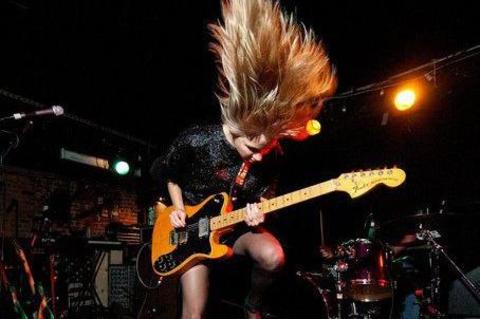 "This band is fully ready to break out in a whole new way. Phantoms, which drops in August, is the perfect description of this group’s sound, an unexpected mashup of eerie fragility and in-your-face rock... music that can morph from easy, chill listening to throbbing late-night anthems within the course of a song." - NYLON Magazine

“…dressed like they were going to dish out a collection of Dolly Parton hits. Well, looks can deceive. The sound that they made was as molten as hell. The seraph-like Ms. Larson and her band can produce music that is nothing short of an assault. They were loud. So loud, they could make Nirvana seem fit to play a GOP fundraising cocktail... This is rock done right.” – Poptimes Magazine CMJ 2010

"How could I have not known about Ume? An Austin trio fronted by a whirling dervish of singer guitarist who in the standard PR band head shot looks like she wouldn't hurt a fly; yet give her a guitar, a Marshall stack and a mic and stand back, way back. She shreds. File under - Do Not Overlook and Go Tell Your Friends..." - Dave Allen, Gang of Four/Pampelmoose

"Front woman Lauren Larson’s maniacal guitar work, blistering chops and arresting charisma give every leading lady from Joan Jett to Karen O a run for their money, while resuscitating an arguably hibernating genre within the indie music circuit: pure rock and roll." - Myspoonful.com