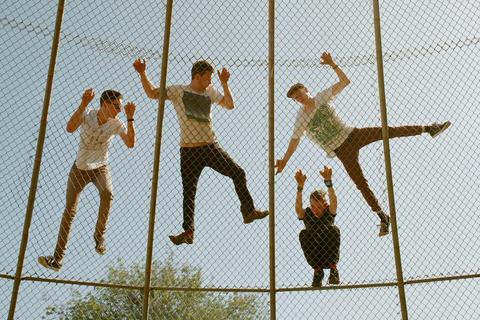 alt-J (∆)’s name takes a little explaining. Pronounced “alt-J”, the delta sign is created when you hold down the alt key on your computer keyboard and punch ‘J’ on a Mac computer. The symbol has a deeper meaning for the band, as guitarist/bassist Gwil Sainsbury notes, “in mathematical equations it’s used to show change,” and the band’s relatively new name came at a turning point in their lives.

Gwil, Joe Newman [guitar/vocals], Gus Unger-Hamilton [keyboards] and Thom Green [drums] met at Leeds University in 2007. Gus studied English Literature; the other three Fine Art. In their second year of studies, Joe played Gwil a handful of his own songs inspired by his guitar-playing dad and hallucinogens, and the pair began recording in their dorm rooms with Gwil acting as producer on Garageband.

Needless to say, the response to Joe’s hushed falsetto yelps and Gwil’s rudimentary sampling skills was good. When Thom was played the tracks he joined the band straight away. “I hadn’t heard anything like it,” he says. “It was music I was looking for, I just didn’t know I was. I just loved it.”

Gus completed the band’s lineup and together – first as Daljit Dhaliwal and then as Films – the four friends spent the next two years playing around town, developing a precise and unique brand of alt. pop that draws on poignant folk verses, crushing synths, smart hip hop syncopations and tight vocal harmonies. They dropped the moniker of Films in 2007, largely to avoid confusing the band with Californian punk troupe The Films. alt-J (∆) gave them a unique name to go with the unique ‘folk-step’ that they now concoct in the basement of a terrace house in Cambridgeshire.

Admiration and favourable comparisons have come thick and fast for alt-J (∆). Before the release of their instantly sold out debut single on Loud And Quiet last October, the band were described as “Nick Drake meets Gangsta Rap,” and they were likened to Wild Beasts, ‘In Rainbows’ era Radiohead, The xx and Anthony & The Johnsons – acts acclaimed for their ability to create the kind of patient, sophisticated, intricate music that alt-J (∆) do.
An early demo of the skittish, euphoric ‘Breezeblocks’ gained healthy radio play without even being released and alt-J (∆)’s Soundcloud generated over 70,000 plays in its first 6 months with little to no promotion.

From Joe’s high soul cry and Thom’s refusal to drum with cymbals (he started with saucepans because he couldn’t fit a full drum kit in Gwil’s bedroom where the band first practiced), to the sparse guitars and Gus' delicate key clunks on songs like 'Bloodflood', a neat sound-bite for ∆’s music is yet to be coined, and perhaps never will be. And by challenging what constitutes folk, hip hop, indie and pop music, the band have quickly found themselves in the studio at the beginning of 2012, recording their debut album for Infectious Music with long-time producer Charlie Andrew (Micachu & The Shapes, Eugene McGuinness).

Veering wildly from psychedelic avant pop to skeletal folktronica, the finished album promises to trade in understated beauty one minute and epic oddities the next, just as you’d expect from a debut album that tackles everything from love to bullfighting to the heroic life of 1930s war photographer Gerda Taro, crushed by a tank on the frontline. Other tracks are inspired by cinema, including ‘Matilda’ (about Natalie Portman’s character in Luc Besson’s Leon) and the Good The Bad And The Ugly-referencing ‘Tessellate’.

Presented by: NPR Music (Badges and Wristbands Only)