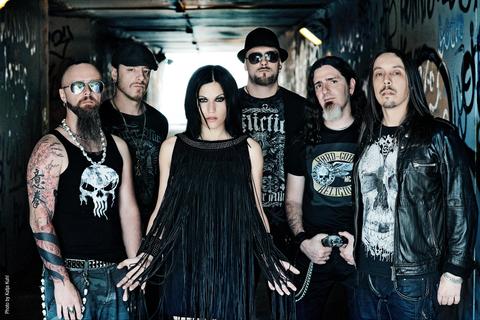 Listen to Trip The Darkness

Moving and powerful, mysterious and serpentine, the music of Lacuna Coil has always been somewhat of a mystery to nail down. Too brawny to be gothic, yet too melodic to be purely metal, the band has carved a path all its own with their unique sound and undeniable songwriting prowess. With the appropriately-titled Dark Adrenaline, the Italian sextet’s sixth full length release, they once again deliver a dozen songs that are tinged with sadness, honed in anger and wielded with a deft touch and a brawny punch.

Never a band to repeat itself, the songs on Dark Adrenaline are undeniably Lacuna Coil, but feel more complete than the band’s 2009 release Shallow Life. Co-vocalist Andrea Ferro explains, “On the last album we were looking at experimenting with our music. With Dark Adrenaline we’ve been able to sum up almost all of the different aspects of Lacuna Coil”. There is a fluidity and maturity to the new songs that show a band that is willing to branch out while still staying true to their sonic roots. “We are aware of what we and our roots are, but at the same time we look into the future with our own vision. Dark Adrenaline is the victorious sum of 15 years of experiences”, offers up front-woman Cristina Scabbia.

And a triumphant victory it is. The first single, album opener “Trip the Darkness” bursts with heft and passion. The song, about facing your darkest hours without fear, introduces a theme that runs throughout the album. Scabbia explains, “We realized that the lyrics were about sadness, rage and anger, but also power, self esteem and excitement. “ The band channeled everyday life - all of the good and the bad, the bold and mundane - to create the music on Dark Adrenaline. “Our real life events have been the biggest influence for us,” explains Ferro, “There isn’t any one concept, just a lot of dark vibes and flowing energy.” Other standout tracks include the blistering “Against You”, a song about uprising, which is particularly timely given the world’s current political climate, and “Intoxicated”, with a degree of drama that is almost cinematic in nature.

The band once again teamed up with producer Don Gilmore (Linkin Park, Duran Duran, Avril Lavigne) to record Dark Adrenaline. “We had a great time in the studio with Don. We felt that since we knew each other [having worked together on 2009’s Shallow Life], we’d be able to maximize our working relationship”, offers Ferro. That comfort comes across in the cohesion of the album. Initial tracking took place at bassist Marco Coti Zelati’s studio with the two singers. Guitarists Cristiano Migliore and Marco Biazzi and drummer Cristiano Mozzati then came and fleshed out the songs, breathing life into them. Even the band’s cover of R.E.M.s “Losing My Religion” feels truly at home in the Lacuna Coil songbook. Scabbia explains this cohesion wasn’t the case when the album initially began taking shape, “We felt the songs were turning into something harder and more obscure than on previous albums, but through team work, common goals and open minds, we came up with Dark Adrenaline.”

The band will once again embark on a world tour in support of the new album. Having already played on Ozzfest, Gigantour and all of the major European festivals, Lacuna Coil are a well-oiled machine on the road that deliver the goods nightly. Fans are in store for a real treat when the catch the band this time around, as 15 years into their career the band shows no signs of slowing down and they are primed and pumped to take their Dark Adrenaline to crowds the world over.