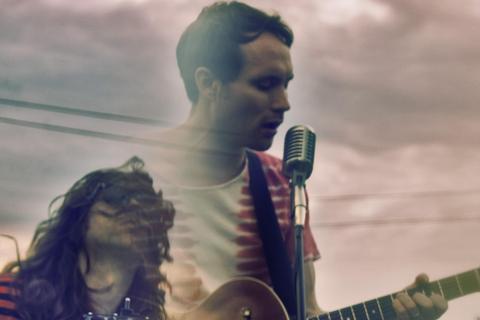 Listen to (Into The) Atmosphere

***
After six years of constant Holy Fuck touring, Brian Borcherdt
emerged from the tangled cables and broken drum machines with a
slew of new songs. Looking to explore a different sound, Borcherdt
teamed with producer Leon Taheny (Final Fantasy, Rituals, Bruce
Peninsula) and together the pair recorded in a converted garage
under the name Dusted.

The resulting album, Total Dust, resides in an atmosphere that is
sometimes melodic, sometimes haunting, and always clouded by a
fuzzy glow. With string arrangements and half-hidden guitar
feedback held together by the occasional tambourine and minimal
drum machine, the stripped down mood perfectly complements a
collection of songs that are more than capable of standing on their
own merits.

Live, Dusted challenges the sonic limitations of a two-piece.
Vocals and guitar are expelled through small overblown amplifiers
and bolstered by a raucous backbone of live drums, 808 samples, and
bass synth. Since their stage debut this spring, the band has
performed with labelmatesDeerhoof and of Montreal, while back home
in Toronto the duo has been playing parties with fellow friends
Army Girls, Odonis Odonis, and Little Girls.

Total Dust will also be released as a limited-edition run of 500
copies on 180 gram maroon-colored vinyl, which can be pre-ordered
here. In addition, pre-orders of the CD version will include the
bonus track, "Centuries of Sleep".

The show at Red Eyed Fly on Thursday, March 14