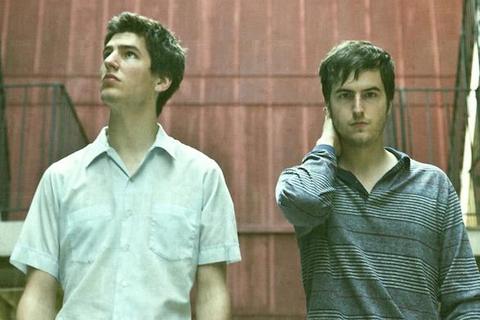 Stagnant Pools are Bryan and Douglass Enas, two brothers (21 and 22) from Bloomington, Indiana. With just one guitar and a drum kit, they make music which the Chicago Reader described as "Drone-heavy, slate-gray art-rock that should appeal to fans of Disappears, Joy Division, and Sonic Youth records from back when they were still
actually scary."

After a couple of DIY releases, the sibling duo spent one day in the studio recording their debut full-length Temporary Room, which was released in August by Polyvinyl Records (Japandroids, Of Montreal, Deerhoof). With a tour van as a recent graduation present and tours under their belt with Japandroids, School of Seven Bells, Maximo Park, and David Bazan, the band will continue touring Nationally and Internationally in 2013.

The show at Red Eyed Fly on Thursday, March 14