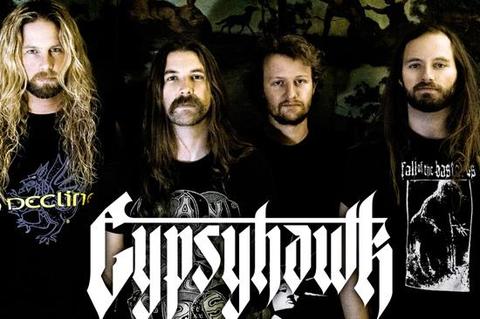 “Gypsyhawk is four metal dudes playing rock and roll and bringing the party every time they get on stage,” states guitarist Andrew Packer, and there is perhaps no better way of surmising the spirit and sound of the Pasadena quartet. Revisiting the electrifying sounds of bullshit-free 70s rock, the band are a breath of fresh air compared to the endless onslaught of breakdown obsessed bands cluttering up heavy music. Marinating their wares in whiskey and weed, they hurl out blistering riffs and irresistible hooks and grooves, doing their damnedest to ensure that everyone at their shows is having as much fun as they are. With Revelry & Resilience, their second full-length and Metal Blade debut, this vibe bleeds from the speakers from start to finish, determinedly putting a smile on your face and compelling you to throw your hair around, no matter how much or how little you might have. “It’s music for girls to shake their asses to and dudes to bang their heads,” states vocalist/bassist Eric Harris. “It’s good-time rock and roll, and we don’t take ourselves too seriously, but at the same time we’re not one-dimensional ‘yeah-dude-let’s-party-all-the-fucking-time!’ guys, and I like to think there’s something for everyone in our music.”

With the members having cut their teeth in bands such as thrash behemoths Skeletonwitch, progressive stoners Suns Beneath, and the mighty White Wizzard among others, they individually earned their metal stripes long ago. However, over time the various members found themselves growing increasingly disillusioned with what that genre had to offer. “I was getting so sick of extreme metal and it seemed like that was the only thing anybody wanted to do,” Harris sighs. “I had always wanted to start a killer rock and roll band but it had never been the right time, and in 2008 I ended up in LA and it was the perfect opportunity to make it happen.” Hooking up with Packer, the band started gigging and building up a reputation for themselves, and with their initial line up recorded and released 2010′s Patience And Perseverance, though it was not until guitarist Erik Kluiber and drummer Ian Brown were brought into the fold that the band truly found their sound. “Andrew’s always been my right hand man in this band, I won’t make a move without his consent and vice versa,” Harris says. “Ian is just one of the most solid drummers I’ve ever played with, and he comes from a different musical background from the rest of us, so it’s nice to have this extra perspective in the band, while Erik’s a really cool guy from Detroit who really knows his instrument. I’ve always been a fan of music from that city – The MC5, Bob Seger, The Stooges, Alice Cooper – and he has some of that Detroit dirt on him, and brings something special to the band.”

Wearing their influences on their collective sleeve, the band’s sound is certainly one that harks back to the time when the likes of Thin Lizzy and Deep Purple reigned supreme, yet they are no nostalgia act merely emulating their idols. “We love all those bands, but I think what we do is to kind of look at the music from that era through modern lenses,” explains Packer. “Our songs are a mash up of a lot of bands that have influenced us, and what we do isn’t strictly rock and roll. We have some thrashy parts to what we do, and Erik can shred. He has some really impressive stuff that will make a lot of metalheads want to do their homework! We kind of take the approach that anything goes as long as there’s no cookie monster growls or blastbeats, and we’ve really found our own sound.” Backing up Packer’s words, the band’s distinct personality is splashed all over Revelry & Resilience. Whether it’s the edgy and upbeat barroom swagger of “The Fields”, the balls out stomp wielded by the serpentine grooves and blistering leads of “The Hedgeking”, the head-bobbing bounce and triumphant air of “Frostwyrm” or their crunchy yet soulful take on Johnny Winter’s “Rock And Roll, Hoochie Koo” the record crackles with energy while being wholly devoid of pretension, and on every level it is leagues ahead of its predecessor. “A lot of the song structures on Patience And Perseverance are quite proggy, with only a few kinda straightforward rock songs, and I think that stemmed from not really knowing quite what we wanted to do, and maybe not having the right dudes in the band,” Harris states. “On this record the line up just clicked, we knew what we want and we knew how to get it. We’ve really gone for more rock or pop song structures, and I think a lot of the record’s energy comes from that.” Lyrically speaking, Harris draws inspiration from perhaps unexpected sources, mixing songs about partying with those influenced by George R. R. Martin’s series of novels A Song Of Fire And Ice (on which the hit HBO series Game Of Thrones is also based) and even on the vocalist’s interest in quantum physics. “We fucking love smoking weed and drinking beer and having a good time, but at the same time we like to read books and play Magic: The Gathering, total nerd shit, and we like that to be a part of what we do with our music,” Harris smiles.

The definition of a DIY band, the quartet have determinedly done things off their own backs since their inception, including self-producing Revelry & Resilience, which has allowed them to retain complete control over everything they do. “Having worked with producers in other bands I’ve been involved with, I know I would much rather have Gypsyhawk do it without anyone else’s interference,” Harris states. “I don’t want to get caught up in that situation where you say these are the songs and this is what our band is, and the producer says no, no, no, all wrong! That’s not our band and it’s not going to come across sounding like our band if someone meddles with it like that, and we’re proud of what we do and want to represent that as best we can.” Committed to touring as hard as they can, the band constantly hit up new cities, bringing their sound to an ever-larger audience, yet they are humbly surprised to frequently learn that their name precedes them. “I’ve been in cities with another band I play with – where Gypsyhawk never played – and I’ve had people come up to me and go fuck dude, when are Gypsyhawk gonna come here? And I’m like when the fuck did you hear my band!?” Harris laughs. Packer is also heartened to see the diversity of the people coming to check them out. “There’s the older guys who tell us they love us because we’ve got that old school thing going on, and some pretty serious metal dudes we were sure would think we were a bunch of pussies but who love what we do!” he laughs. “But then we’re getting in some younger crowds, some punks and glam looking kids too, and I think that despite us taking our cues from the seventies what we do sounds fresh right now, because everything else is getting so played out.”

If one thing is for sure it’s that the four guys in Gypsyhawk are not looking for overnight stardom and want to put the work into building something that lasts, and deservedly so. “I really want to take this band as big as it can possibly go but because it’s good music that people want to hear, and I want the chance to try different things on the records we make in the future, to really see what we’re capable of,” says Packer. “We’re just going to write the best music that we can and we’re gonna write the truest music that we can,” Harris adds. “We want to play this music everywhere that will have us, but we’re pretty realistic about everything, and we’re just having a good fucking time while we can.”