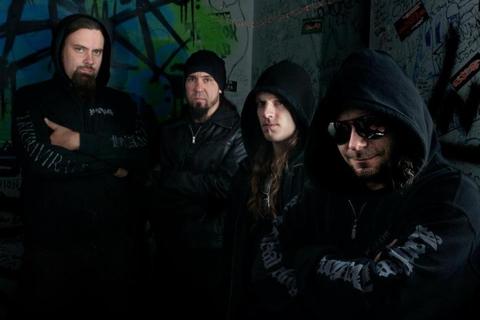 Listen to When Steel and Bone Meet

Over the course of nearly 15 years and an incalculable amount of tour miles, New Orleans' own Goatwhore have inadvertently established themselves as one the most diligent and consistently ferocious bands of the 21st century. Forged in fire by ex Acid Bath/Crowbar guitarist Sammy Duet in '97, their storied legacy follows a dramatic —and often traumatic — series of lineup shifts, injuries, haunting
s, natural disasters and an assortment of other mishaps large and small. But, driven by a blood oath to heavy metal and perhaps the powers of Satan himself, Goatwhore forever persevere.

Their journey began with the bestial Serenades To The Tides Of Blood demo and subsequent Eclipse Of Ages Into Black debut full-length unleashed over a decade ago. Then a five-piece comprised of Duet, Soilent Green vocalist Ben Falgoust, guitarist Ben Stout, bassist Patrick Bruders and drummer Zak Nolan, the band's stanch DIY work ethic, rigid tour schedule and the bludgeoning force of songs like "Invert The Virgin" and "Desolate Path To Apocalyptic Ruin" quickly spawned a maniacal cult following. By 2003, Goatwhore had systematically harvested a legion of followers possessed by the band's profound maze of unhallowed lyrics, Celtic Frostian rhythms, and blackened bayou swagger. Catastrophe–brewed sophomore release, Funeral Dirge For The Rotting Sun, bore a slower, broodier brand of apocalyptic menace; onethat trailed a near-fatal van crash that left Falgoust temporarily paralyzed and the future of the band in disarray. Against all medical odds, Falgoust regained use of his legs and the band, now a four-piece with Duet taking on full guitar responsibilities, quickly returned to their rightful place on the road. Seemingly drawn to bouts of misfortune, A Haunting Curse found the revised Goatwhore lineup of Duet, Falgoust, drummer Zack Simmons (ex-Nachtmystium) and bassist Nathan Bergeron, fleeing the debilitating floodsof Hurricane Katrina. Delayed but undeterred, Goatwhore's first Metal Blade offering proved their most volatile yet. Relentless in speed, precision and barefaced animosity, Goatwhore had traveled well-beyond the confines of conventional black metal with a thrashier end product that fully-embraced their long-avowed Hellhammer and Venom devotion without ever plagiarizing it.

Released in 2009, the sinistral Carving Out The Eyes Of God hit with titanic urgency. Hailed among the year's most worthy metal albums by fans and critics nationwide, Goatwhore's fourth long-player shattered mainstream conventions. The recordbroke Billboard Top 200 ranking in at #190, debuted on the Billboard Hard Music chart at #33, the Billboard Top New Artist (Heatseekers) Albums chart at #16, and the Billboard Top Independent Albums chart at #34. Decibel magazine declared the production,"the band's tightest, most guitar-driven offering to date. An unholy smorgasbord of rigid tempo shifts, gargantuan hooks, blasting black mass anthems, and Falgoust's soot and venom snarl…," while Outburn compared it to, "a modern day, 'roid-injected sword fight between Celtic Frost and Venom." High traffic web portal Blabbermouth crowned the production "…one of 2009's purest metal albums…nefariously black and sadistically thrashing in a way that is uniquely Goatwhore," while MetalSucks proclaimed Carving Out The Eyes Of God "the catchiest album Goatwhore have ever released." Furtheralbumtriumphs included a spot on the 2010 edition of Ozzfest and two performances at the annual SXSW music conference enabling the horned collective to deliver their sadistic hymns of religious treachery to an even broader sect of listeners.

For the next two years, the band maintained an infamously unyielding tour cycle, leveling cities throughout the US, Canada, Europe and Australia with their universally praised live rituals. Further educating the potentially unversed, "Apocalyptic Havoc" appears on the Xbox 360/PlayStation 3 game soundtracks for Splatterhouse and more recently, Saints Row 3, while the video for the song was featured in an episode of Last Call with Carson Daly. And as if to close out a near perfect run of riotous adventures, Goatwhore was named Best Hard Rock/Metal Artist of 2010 at The Big Easy Awards last April, a deserving honor based on performance throughout the year.

In 2012, Goatwhore again raise their cloven hoofs in salutation to Blood For The Master. Now featuring Duet, Falgoust, Simmons and bassist James Harvey, who joined the goaty ranks in 2009 following the departure of Nathan Bergeron, the record finds Louisiana's notorious metal horde at their most unified. Recorded and mixed at Mana Recording Studios in St. Petersburg, Florida with longtime friend/producer Erik Rutan, who worked with Goatwhore on both Carving… and A Haunting Curse, the ten-track, 38-minute Blood For The Master is epic in sound, mind and execution.

Released through Decibel Magazine's flexi series, and later posted online for the masses to absorb, a cover of Motöhead's "(Don't Need) Religion" was presented as an album teaser in October. An appropriately infernal rendition of an often neglected classic, the song served as the perfect precursor to an album prevalent in its hailstorm of fist-pumping, heathen anthems and rhythmic devastation.

Exhibiting a labyrinth of moods and meticulous tempo shifts, Blood For The Master is streamlined without ever rendering itself predictable. As memorable as it is menacing, the band's fifth full-length quite literally writhes under the weight of its own deviant heaviness. Led by the traditionally iconoclastic sermons of the leather-throated Falgoust, and made whole by its mammoth guitar tone, unconditional drum/bass battery and Duet's intermittent snarls of wrath, the record again challenges god's legitimacy/authority while further exploring the ritual of death. Conveyed with a poetic, near occultish grace, songs like violent opener "Collapse In Eternal Worth," "Embodiment Of This Bitter Chaos," and "In Deathless Tradition" finds Falgoust, dubbed "one of the best live and recorded singers in metal history," by notable Canadian website Hellbound, in full domination mode. "I always have a lot of words," he elaborates. "I don't like repeating things but I've started doing more chorus-verse-chorus stuff. I started letting the music breath more."

"It's not like the new songs are a drastic change," Duet noted in an early interview with Decibel Magazine. "It's like an experimentation on how much more metal we can get – I mean actual metal; the roots of heavy metal. But not in a way that it sounds like power metal or anything like that. It's like an extremely metal version of us."

"I thought this was a lot harder to write just because we didn't want to repeat ourselves," he further notes. "I mean, we could have easily gone and written another Carving Out The Eyes Of God but we didn't want to do that. There are still elements on the new album that we wouldn't normally do, but it definitely still sounds like us."

"It's definitely harder at this point," Falgoust agrees of the writing process, "because you start to get to the point where you're a little older and more conscious about your ideas and everything; you become more anal about things. I'm still getting used to it, but I really like it. I like the flow. When we write, we try to think of it in a live approach. A lot of people write records but they never really focus on playing it live but that's so important. We can do all of these songs live, which is something we did with Carving… as well."

"I think sometimes we get slighted for stuff" Falgoust continues on where the band now fits within metal's ever expanding pantheon of subgenres. "Whatever terms people decide to lock us into— black metal, death metal, black death metal, everyone's gotta have some kind of little blanket. It's almost like a social standing. To me, it's all just straight heavy metal."