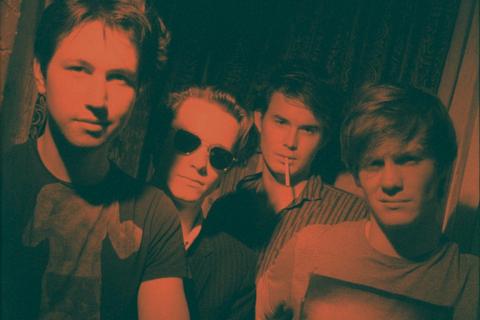 Listen to Best of Friends

For a long time if you wanted to hear the most exciting new band in Britain, you knocked on a tall black door off the Lambeth Road. An aging British Rail building - part art studio happening, part squat – Studio 180 was where south London’s Palma Violets were gestating, away from sunlight and the world at large.

A thrilling rock'n'roll four piece channelling The Clash, the Mysterians, and the Bad Seeds, from September 2011 they were holed-up here writing songs "their friends could dance to" and occasionally putting on celebratory, ecstatic parties about which word quickly spread.

The opposite of the last significant development in English guitar music when the Arctic Monkeys became the first "MySpace band", harnessing the power of the internet and prompting BBC documentaries and convulsions in major record labels, the Palma Violets’ rise has been notable by their total avoidance of the worldwide web.

In fact until a couple of months ago, they had no online presence, no music recorded, and no press team working for them, this wasn’t the product of some fiendishly counter-intuitive marketing strategy, it was because all they cared about was playing shows.

“We didn’t want to put ourselves on Facebook, Youtube or the internet because we hadn’t recorded any songs,” explains singer Sam Fryers. “We were making this noise together in a room for fun and that’s where you had to experience it.”

“The best way to see a rock’n’roll band is to go and see them play live,” elaborates bassist Chilli Jesson. “That’s all we wanted people to do.”
“And of course, we hate being in recording studios,” laughs Fryer.

It’s not hard to see how word of mouth spread about the band. If you got through the door in that early period, what greeted you was an intoxicating sense of chaos. Beer being sold out of a dustbin in a makeshift kitchen, experimental artwork protruding from every wall, kids milling about, seemingly all friends, just waiting for the moment the band would start to play, normally around 11 at night, but sometimes a whole lot later.

In an airless basement that could hold 50 people, the band would finally appear in a hail of feedback and organ noise, before blazing their way through a short, incredible set: their sound a primitive, wild rock’n’roll music offering echoes of ‘60s garage and soul but with a defiant Englishness at its core, the band themselves radiating a ferocious energy, encapsulated in the tense and tactile interplay between Jesson and Fryer but driven forward by the incessant beat of Will Doyle’s drumming.

After a period of parching drought in British guitar music, this was akin to stumbling across the oasis in the desert just before you and everyone else died of dehydration.

Unsurprisingly, it didn’t take long for record labels to catch on and in the first few months of 2012, Palmas Violets were courted intensely. From the outset, though, they only ever wanted to sign to one, and that was Rough Trade.

“When Rough Trade came down, it was so special. It was like they restored our faith in music. I mean they actually talked about music for a start. Geoff Travis was the only person who picked up on the fact that we were doing a cover of The Riveiras’ ‘California Sun’. The other guys talked about supermarkets and shelving and how we were going to penetrate the market.”

The feeling was mutual.