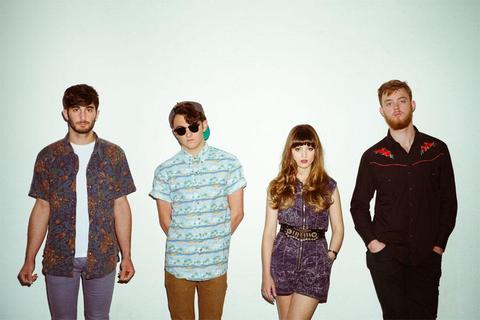 You hear the distinct vibration of your mobile phone. A text message from a new crush. Do you text back? Do you wait? Is it stalking or does it just show that you’re keen? Everyone has been there, taking those first steps in a new relationship. It’s, well, awkward.

For San Cisco, there has been very little waiting around. The four-piece have followed their own path since emerging from Fremantle, Western Australia, a few years ago. From humble beginnings of weekend jams to being nominated for a 2011 Unearthed J Award and landing themselves at #7 in triple j’s Hottest 100 countdown the band have a natural chemistry, growing organically into their own mold to create their EP, Awkward.

Lead single ‘Awkward’ is an unmistakable pop gem featuring the vocal talents of both Jordi Davieson and drummer, Scarlett Stevens. Penned in the studio one afternoon, the song was voted in to the top 10 of triple j’s Hottest 100 and scored over 3,000,000 plays on YouTube.

San Cisco went into the studio with Steven Schram (Little Red, Little Birdy and Cat Empire) in Melbourne to delve further into the songs they had perfected on stage and in the backyard shed. The finished product is their EP, Awkward featuring four tracks of indie pop goodness, showcasing Jordi’s turn of phrase and Josh Biondillo’s varied influences in his music writing. In its entirety it is an eclectic mix of indie pop with dashes of rock and slashes of synth. Each member of the band brings a different influence to the table from their diverse and eclectic palate of indie, rap, hip-hop and jazz.

Schoolmates Josh and Jordi bonded over their love for skateboarding and the water, but what brought them together was their passion for music. While Josh is the music man coming to the table with the arrangement and melody, Jordi will talk over the top delivering a slew of words that grows into his in-depth lyrics fantasizing about the world. Add fellow schoolmates, bassist Nick Gardner and Scarlett Stevens on drums and San Cisco came to fruition.

The four-track EP is a statement of intent for a band on the cusp of something big
The irresistible ‘Lover’ shows off their buoyant and bright song-writing with each verse following the progression of a relationship. Taking the tempo a little more downbeat is the closing and emotively powerful song, ‘Reckless’, true to its lyrical content that “Reckless is fun when you are not the one that gets hurt.”

Having already graced the stages of Big Day Out, Laneway, Fuse Festival and Big Sound as well as a selling out a number of Australia tours. San Cisco are heard on airwaves around the world gaining airplay on triple j, community radio in Australia, London’s XFM station, college radio across the USA and Flux FM in Germany. San Cisco have set themselves apart from their counterparts with the depth of their song-writing and their bright catchy hooks.

With all this in place, it is little wonder that San Cisco already have some stalkers of their own. The Awkward EP is out now Fat Possum. Full length release in 2013!