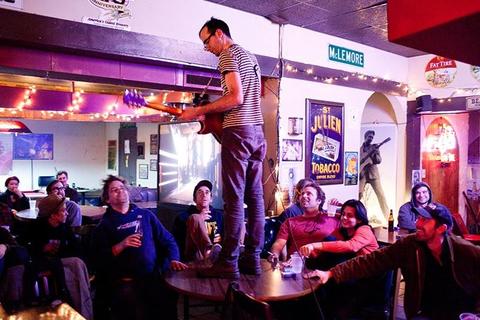 A heavy touring schedule saw members dropping like flies, with only mainstays/lifers Dan McGee (songwriter, guitar, vocals) and Gregg Levy (guitar, bass) left standing. But invigorated with a batch of brand new songs, they completed the current quartet lineup with mighty Rock Forbes on drums and Steve Oliva on bass.

The quartet packed up a few essentials into a mini-van and headed to their spiritual home of Memphis, TN. They set up shop in the home of engineer and musician Andrew McCalla. In a matter of only three days, the Spider Bags recording session became a non-stop party and impromptu “happening”. The band played an in-store at legendary Goner records, a frenetic live show to a capacity audience, and all the while managed to record Shake My Head, sleep be damned. This record is a document of a true rock-n-roll party, where members of Memphis bands and luminaries like Jack Oblivian (Oblivians) and Shawn Cripps (the Limes) wandered in and out of the sessions to either lay down some guitar or backing vocals or just drink a beer and have a good time. And a good time was had, as you can actually hear on the record itself.

For Shake My Head, Spider Bags have let go - kicking off the proverbial shoes, just going in for the pure fun of it. The result is a phenomenal blend of Beefheartian weirdness, gang vocals, and enough guitars and riffs to make any Reigning Sound, Royal Trux, or Ty Segall fan plenty happy. The songs themselves pull together a schizoid melding of Stax-style-R&B (Simona La Ramona), Brill Building melodies (Friday Night), west coast psychedelia (Shape I Was In) and ‘down on the street’ swagger (Quetzalcoatl Love Song). These are the new “nuggets” for the freaks and heads of our technologically muddled/fucked world. Rejoice, brothers and sisters - for rock and roll is alive and well!