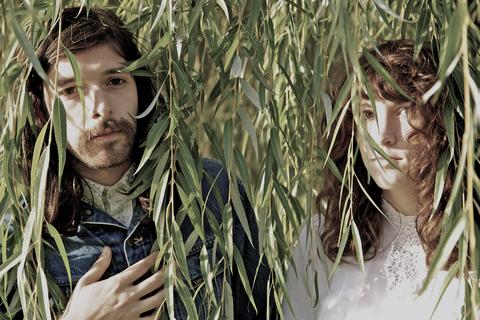 Listen to Ballad of the Golden Hour

Widowspeak is an American band comprised of Molly Hamilton and Robert Earl Thomas, known for its dreamy, western-tinged take on rock and roll. The outfit formed in 2010 and released two singles in 2011 (Harsh Realm, Gun Shy) followed by a debut album (self-titled) in the summer of that year, all on Brooklyn label Captured Tracks. Widowspeak was praised for its reverential spaciousness, Hamilton’s haunting voice, and Thomas’s spindly, Morricone-esque guitar lines; both drawing on 1950′s pop ballads and 1970′s psych, creating languid call-and-response melodies. The band then toured extensively, wearing in their warm, nostalgic sound.

Widowspeak began to write what would become their second record, Almanac, at the start of 2012, as popular fears of the apocalypse became imminently close to realization. Though not totally convinced of catastrophic disaster coinciding with the year’s conclusion, Hamilton nevertheless began writing lyrics seeped in doomsday imagery, darkness and dread, inspired by the idea of such a universal experience of the end. The two started making demos in their practice space. Thomas shaped the ideas into songs, experimenting with denser arrangements and grander gestures. Black and white became Kodachrome, subdued became saturated. Widowspeak explored Appalachian melodies and desert rhythms, Saharan to the Southwest, as well as incorporated acoustic instruments and slide guitar, stemming from a shared love of Neil Young.

As the compositions were brought to life, they became something new, something unlike the fatalistic seeds from whence they’d grown. These songs were no longer concerned with the end of the Earth, but with the life and death of seasons, youth, love, and the cyclical nature of all things. The band chose the name ‘Almanac’ in tribute to those annual tomes which have eternally provided predictions of weather patterns, lunar and solar movement, and astronomical phenomena. But the songs are also about the changing times we find ourselves in: “the good old days” at odds with the hyperactive present, and the sense of loss, but also adventure, which that provides.

The album was recorded by Kevin McMahon (Swans, Real Estate) in a hundred year old barn in the Hudson River Valley of New York State during the transition from summer to fall. Producing with McMahon, Thomas expanded on the band’s demos, crafting layers of guitar, Rhodes piano, organ and harmonium.

Almanac was released by Captured Tracks on January 22, 2013.