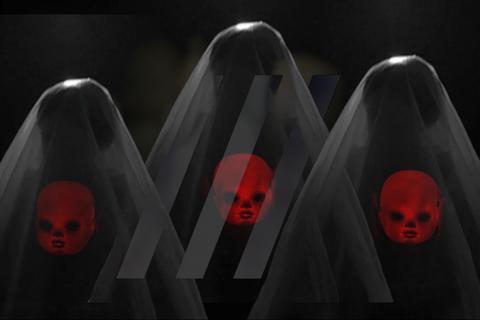 NO CEREMONY/// are an electronic three-piece from Manchester, UK.

Be it their music, or their artistic videos, striking artwork or direct website, all of which they create and control themselves, this juxtaposition of the inhuman and the soulful, of the aggressive and the beautiful, works to underpin everything NO CEREMONY/// do.

Originating in August 2011, the band announced their arrival onto the musical landscape in style, with their widely-lauded track 'HURTLOVE' setting blogs alight within 24 hours of release. Since then, they have shown no intention of slowing down, and over the last year have released six tracks to their ever-growing fanbase, each available as a free digital download, and two 10" vinyls on their own label, NOC///.

Alongside this, they have collaborated on original music with the likes of Joey Santiago (PIXIES), Mike Joyce (The Smiths) and Stay+, remixed numerous well known and up and coming artists including Alt-J, The Temper Trap and Patrick Wolf, and created mixtapes for legendary electronic music DJ Mary Anne Hobbs and popular French music site HORS D'OEVRES.

From the outset, the trio chose to shun traditional methods of self-promotion, instead choosing to keep the personas behind the music away from the limelight. They still do not appear on social media sites, have had no press shots taken and no personal biography written. Rather than simply being obfuscating, this decision was a way for them to focus all their efforts on creating music without the distraction of social media publication or autobiographical self-promotion.

As the band themselves comment - 'It’s not about being secretive or mysterious and more of a reluctance to engage. We want to engage through our music – that’s where we put our message and emotion.' Subsequently, they have received a vast amount of critical acclaim purely for their consistent output of innovative, forward-thinking electronica, both at home and abroad.

Hailed as Zane Lowe's (BBC Radio 1) Next Big Hype, and featuring as one of The Independent's Most Blogged Artists, NO CEREMONY/// have received Hype Machine Top 10 rankings twice, including a prolonged stay in the number 1 position for most recent release 'FEELSOLOW'. They have also been featured on Pitchfork, playlisted on XFM (UK), Amazing Radio (UK), NRK (Norway) and Flux FM (Germany), and have appeared twice as Lauren Laverne's (BBC 6 Music) MPFree of the Day.

Taking their music into the live arena has also proved fruitful. Since their first gig in May 2012; a sold out hometown show with Mercury Award Winning Alt-J; they have also shared stages with SBTRKT, Zola Jesus, Willy Moon, Peace and Niki & The Dove.

Soon after their first performance, and before they had even had a chance to play their own headline show, they had been invited to both the BBC's prestigious Maida Vale Studios and the XFM Evening Show studios to record two captivating live radio session performances.

All of the shows they have played in the UK have sold out, and they have toured in France, Germany, Belgium, Holland and Luxembourg, at such high profile events as Pukkelpop, MIDI, Swn, Dockville and Reeperbahn Festivals.

In a glowing review of their performance at MIDI festival this summer, iconic French publication Les Inrocks poetically described NO CEREMONY/// as "A Volcano under the Ice". This succinctly summarizes both the intensity and self-control the band have been acclaimed for, and the torrid emotion that lurks just below, frequently seeping through the mechanical surface of their music. Above all, it marks the genesis of a band for who these notable plaudits are just the beginning. They have recently finished recording their debut album, which is to be released in the early part of 2013.

Whilst the achievements of this formative year are undoubtedly impressive, their inventive music, expanding admirers, and the method by which they connect the two, look set to ensure the future is even more exciting for NO CEREMONY///.