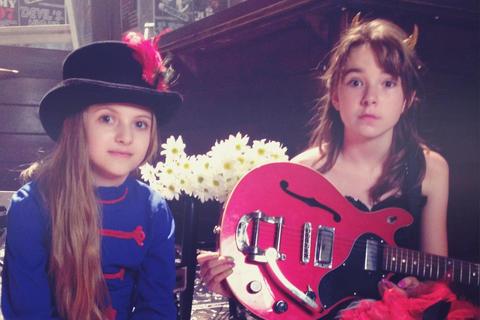 Listen to I Don't Wanna Grow Up

Pretty Little Demons is what happens when two seasoned pros get together to form a band. The girls met at School of Rock North Hollywood during a 2012 spring break camp. 11yo Lydia Night(Dead Man's Bones) had been singing, songwriting and playing guitar for 6 years. Marlhy Murphy(We're Not Dudes, Zeppos) was already one of the best young drummers in the country at just 9.

Austin native, Ethan Allen(BRMC, Donita Sparks, Gram Rabbit) produced their debut EP to be released in February 2013 with album cover art by Rob Reger(Emily the Strange.) The girls raised the money(over $4500) on kickstarter, wrote 5 of the 7 songs and played all instruments themselves. The songs range from such heavy subjects as addiction and death to traffic and daisies.

Pretty Little Demons are 12 & 10 now and are excited to be the youngest band ever invited to perform at SXSW!

The show at Palm Door on Saturday, March 16