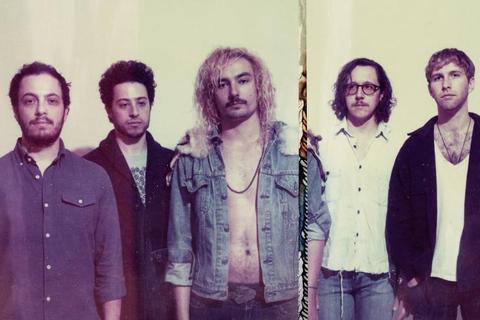 A wise man said: Pick your tenants wisely. Fort Lean, the New York rock band you apparently like so much that you sought out the official literature, are a tenant of mine. This is not poetry. I am their landlord. The first of every month, with remarkable diligence, the Fort wires 200 American into my bank account for the use of a cramped and water-damaged rehearsal space I still haven't gotten around to soundproofing. I like these guys. They're respectful of other people's belongings. They clean up after themselves, usually. I have my suspicions that Keenan Mitchell, the band's wild-eyed singer, has slept in the space without my permission, maybe even with women--but it's all good. The band owns expensive vintage amplifiers. They're open to sharing (usually). As far as tenant/landlord relationships go, ours is copacetic.
As for their music? You've heard it. Fort Lean write big, anthemic rock songs, and they play the hell out of them. Stakes are high. They want to be Oasis. They want to be Springsteen. They want to be U2. My guess is they will be, and here's why: Fort Lean don't want people to "kinda like" them. They want to be a girl's first crush. They want college kids to make bad life decisions based on misinterpretations of their lyrics. They want to write the song you dance to with your second wife on the night of your wedding to your first wife. When your son moves to whatever the new Bushwick is in twenty years, and when he calls you, crying, to report he just got shook down by a bunch of punk kids, Fort Lean want you to smile to yourself and think of that line from "Sunsick": "Get-tin' mugged by chil-drennn!!"
You would think this is every band's wish--to be The Biggest Band In The World. But it turns out that's a lot of work! It turns out that most musicians are self-absorbed fuck-ups who haven't earned the right to be either. Most importantly, it turns out, 99.9% of bands just don't have the chops or the songbook. Fort Lean somehow have both--which is why they stuck out like a sore thumb this past CMJ. They're writing choruses you wish you had written, and playing tighter than your band ever could. They're only going to get better too. Mark my words: the world will get at least five great albums from this band before the singer cracks and decides he wants to be a doctor after all.
Look. I could write thousands of words about keyboardist Will Runge's impeccable style (great face, great denim). I could rap on drummer Sam Ubl's tasty hi-hat work, or bassist Jake Aron's smart use of space. I could tell you about the first time I heard Keenan's voice--an oaky, siren-like tenor that proves once and for all that nature does in fact trump nurture. Or how about this: Zach Fried routinely wears tight red pants, plays a Telecaster, and insists on using an enormous eighty-pound pedalboard even though he only has like two pedals--and somehow gets away with it all! There's just so much to like about this band in the particular. But right now, the thing I like most about Fort Lean is quite simple. They pay their rent on time. They chip in when equipment gets broken. They let me use their Twin Reverb, and the Peavy Bandit (great for leads). I didn't have to tell them twice about not leaving bikes in the hallway. It's hard to find bands like this. I will miss them when they're gone.