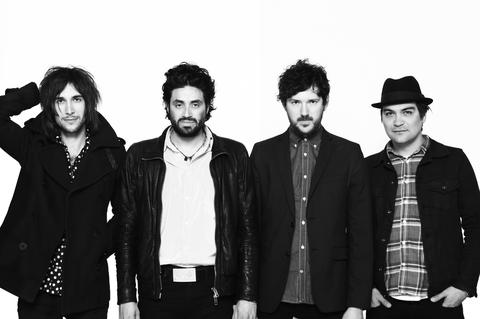 The Soft White Sixties, one of San Francisco’s most talked about bands, have been hailed by some press as legitimate heirs to the Maximum R&B moniker placed on The Who some 40-plus years ago; and while that’s not un-true, The Soft White Sixties offer so much more. Like a perfect collision between the sweetly subversive melodies of T-Rex and the hard-edged pop sensibilities of The Strokes, The Soft White Sixties’ brand of rock ‘n roll blends heavy, soulful grooves with a driving beat.

Since releasing their debut EP in April of 2011, The Soft White Sixties have been busy.

After immediately filling larger venues in their hometown, from Slim’s to The Great American Music Hall, they were invited to perform at festivals around the country. Over the last year and a half, The Soft White Sixties made appearances at The High Sierra Music Festival in Quincy, CA, The Harmony Festival in Sonoma, CA, The Treefort Music Festival in Boise, ID, CMJ in New York, NY, and SXSW in Austin, TX, where they shared the stages with bands like My Morning Jacket, Dr. Dog, Delta Spirit, and The Flaming Lips.

In 2012, The Soft White Sixties successfully completed their first full US tour, going from coast to coast to play 25 shows in 30 days across 16 states. To coincide with the national tour, the band released a 9-episode documentary entitled “Knock It Loose: On The Road with The Soft White Sixties”, covering their first West Coast tour, produced by San Francisco’s own BAMM.tv. You can hear their music regularly spinning on radio stations like Live 105 and KUSF in San Francisco, KEXP in Seattle, WLOY in Maryland, and Radio Boise, and might catch some of their songs currently licensed for film and national television campaigns.

With a new record on the horizon produced by Jim Greer (known for his work with Dan the Automator and most recently Foster the People’s platinum-selling, Grammy-nominated album, Torches), The Soft White Sixties show no signs of slowing down.

The show at Blackheart on Saturday, March 16

8:00PM Mystic Knights of the Cobra