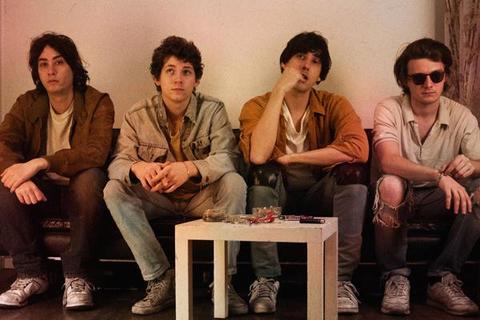 “(The Virgins are) making reliably honest, memorable music…their next album is definitely something to look forward to.” —Rolling Stone

Cult Records is set to release Strike Gently, the long-awaited second full length from critically acclaimed New York-based band the Virgins, on March 12,2012. The album was recorded in NYC at the East Village Recording Center underneath the site of the storied former rock club Brownies and produced by The Unicorn Parade (Johnny T. Yerington and Gus Oberg). Cult Records founder Julian Casablancas notes, “When I first saw the Virgins I was psyched there was such a rad new band from NYC. Donald’s such an awesome guy and it’s great to meet someone who’s such a true artist. I think they’ve made a classic record and we’re really excited they chose to work with us.”

The forthcoming record follows up on the Virgins’ 2008 self-titled debut, which NME raved was “jam-packed with pop hits” and Entertainment Weekly called “punchy and slinky and over before you know it, but good, dirty fun while it lasts,” while SPIN noted that “these New York kids reflect the mirror-ball gleam of primo INXS and Emotional Rescue–era Rolling Stones onto the lives of today’s young, rich, and wasted.”