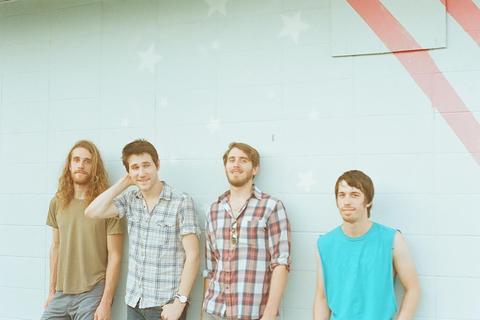 This band is called Bad Cop, from Nashville, Tennessee, and at the center of it are the things that make all great rock bands the way they are: tight musicianship, remarkable songwriting, and above all, the ability to pull together a performance that makes you believe whatever frontman Adam Moult tells you. The songs on Bad Cop’s forthcoming EP play as instantly memorable, catchy pop melodies – because, after all, they are, whether creaking across the wooden barroom floor or barreling full-speed towards the reckless abandon of hardcore punk. But moreover, there is a spirit, wild-eyed and desperate, pulling you in no matter what their approach may be.

First drawing inspiration from iconic groups like The Doors, The MC5, Joy Division, and Nirvana, Moult set out onto the punk scene in Nashville in 2002, playing with bands at Guido’s Pizza when he was just 12 years old. Three years afterwards, he was sent away against his will to Hidden Lake Institution, an “alternative to prison” boarding school in the Georgia mountains, a facility that’s since been sued out of existence due to allegations of abuse. Through two years of such dark, nightmarish conditions, this young man kept his time growing up around music as the means to keep him going in there, writing his first songs while incarcerated, and starting a new band the moment he was able to return home.

That band was Bad Cop, and following a string of demos and the full-length Harvest The Beast, released on NYC’s ROIR Records in 2010, Moult found himself dismantling the lineup that had been circling
around the band since its earliest days. Longtime collaborator Alex Harkness returned, and the two began to expand their approach beyond the shadowy regions of their earliest work, with a renewed
interest in garage and glam rock. “We’re kind of the dark horse band in Nashville,” claims Moult, diverging from other sects of the local scene to build their own following on their own terms.

And the path they’ve ended up taking has opened up Bad Cop to new possibilities and solid friends, like Cage the Elephant, who handpicked Bad Cop to support them on their 2012 tour, and whose guitarist
Brad Schultz wound up liking the band enough to produce their latest EP, which is due for release in late 2012. Tracks like “Light On” linger with a hangdog leer that only intensifies its allure as it rolls onward,
while burners like “Kick It Out” know better than to try to subvert their high-octane punk roots and fuckin’ floor it. Moult attributes the change in direction from earlier efforts to the cumulative effects of
being a music obsessive. “You hear music that’s new to you, you start to make connections. It’s showed me that we can write songs that help return rock ‘n’ roll to what it used to be.”

Following the release of a split 7” with fellow Nashville band Turbo Fruits, Bad Cop will be finishing up work on their new EP, currently being recorded at Battletapes in Nashville. They plan to tour on these
releases in the last months of 2012, around the time the Mayans predict the world will end. But Adam and Bad Cop would rather you not think of it that way. “We play so that the people in the crowd will have the chance to step out of their lives for 30-45 minutes and help them to feel free.”