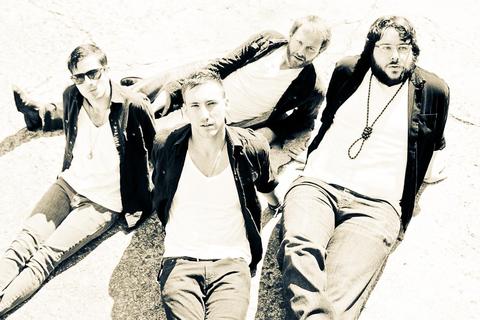 After nearly two years of work, The Pass have finally readied "Melt," Their second full-length record. Mixed by Alex Aldi (Passion Pit, Holy Ghost), the album heralds a new era for the band- one steeped in their experiences of writing, touring, and recording over the past three years.
"Melt is the culmination of taking a lot of our goals when we started our band and combining it with all the things we learned being together for two and a half years. Everything you learn on the road, what works and what doesn't, what you like and what you don't, what makes people smile or scratch their heads," says frontman Kyle Peters.
The release of the "Colors" EP on Sonablast Records in 2010 announced the band to the regional scene, and with the videos of the title track receiving over 180,000 views (and counting) they continue to reach new heights sonically and professionally. A constant touring schedule including sold out dance parties across the country and opening slots for bands ranging from Cage the Elephant to Chiddy Bang have cemented The Pass's live reputation in many US cities. They've also recently seen their music used for high profile media placements world wide and featured in shows such as "Vampire Diaries", "Gossip Girl," "Jersey Shore," "Raising Hope," "90210" and many more.
Sure to top the success of Burst, Melt features a more confident group, now drawing on years of touring the US and beyond, having made a name for themselves with sheer passion and determination. "Ultimately, our goal was still to make a fun album but also reach new levels of emotion - nostalgia and intrigue, longing and desire, complacency and heartbrokenness."

The show at Friends on Wednesday, March 13