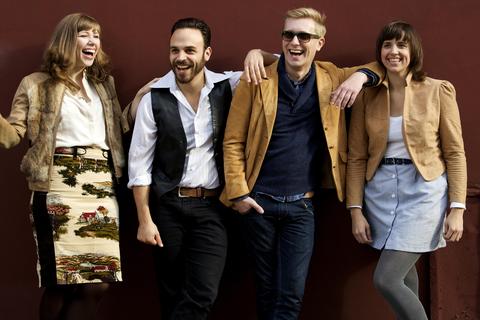 Listen to I Want You Back

Brooklyn-based quartet, Lake Street Dive enjoyed a whirlwind end to 2012 when their video for "I Want You Back" became an internet phenomenon landing half a million views. It all started with an admiring tweet from Kevin Bacon that took off in dramatic fashion. Now, with more and more fans discovering their exuberant and exhilarating sound, they are poised for a breakthrough. Known for their infectious blending of influences, Lake Street Dive is a band with jazz at its heart, combined with a passion for pop, R&B, soul, and a healthy dose of the Beatles and British Invasion bands. Front woman Rachael Price, possesses one of the most impressive voices in the indie-music world and sings with the "escalating intensity of classic soul" (Blurt). Combined with Bridget Kearney’s sinewy upright bass lines, Mike Calabrese’s adventurous jazz inflected drumming, and Mike Olsen's nimble trumpet playing, the results are finely tuned dynamics played with groove-driven abandon. As National Public Radio raved, "This classically trained band blends jazz, folk, and pop in dangerously charming fashion."

Non-stop touring in 2013 will include tours with Yonder Mountain String Band and Josh Ritter, headlining dates at colleges and clubs, and numerous festival appearances including Telluride Bluegrass, Floydfest, Savannah Music Festival and Pickathon.