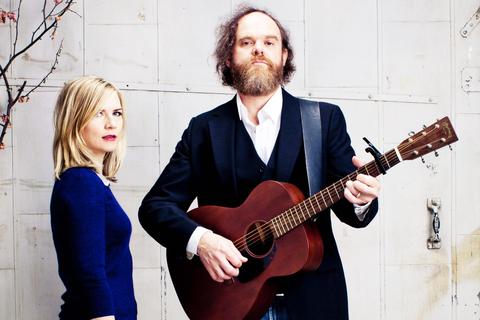 Listen to We're On Fire, Babe

Anders Parker was the main force behind experimental indie-rock band Varnaline. He has also released four critically acclaimed solo albums and most recently has been a part of the Woody Guthrie project New Multitudes with Jay Farrar, Jim James and Will Johnson.

Kendall Meade is most known for her band Mascott, described by Spin magazine as “a tender indie rock project that combines soft piano and guitar pop with diary-like lyrical intimacy.” She has also performed guitarist, bass player, keyboardist and/or backup singer duties for Sparklehorse, Lloyd Cole, Helium and The Spinanes.

Friends and collaborators since the 90s (Kendall has sung on every record Parker has made since the final Varnaline record), they’ve always wanted to do a project together, but the time was never right. Kendall has a Manhattan day job; Anders was continually working on and touring with his own projects. Finally though, in the winter of 2011, Parker dared Meade to make the project happen. She took it as a challenge, and booked a ticket to Anders’ home in Burlington, Vermont.

The following Spring, they recorded in Knoxville, with Kendall’s old bandmate from Sparklehorse, Scott Minor. Anders’ had done a U.S. tour with Sparklehorse in the ’90s. When it came time to choose a studio and producer, Minor made perfect sense, closing a circle years in the making.

Scott’s analog studio, Wild Chorus, was recently completed, and this is the first full-length album to be recorded there. In tribute, the record was named after the studio.

Minor pulled in his favorite local musicians to back them up, and a record was born. “We believed in the songs, and put a lot of trust in Scott to make great decisions with us and he was spot on every time—with the musicians and his production instincts,” says Parker. From the breezy folk-pop lope of “City of Greats” to the groove of “We’re On Fire, Babe” to the reverb drenched ambience of “Oh Love,” each song has its own distinct style, all captured by Minor’s innate creativity and vintage analog equipment.

You can hear both Parker’s and Meade’s distinct styles on the album, but the result is a sound all their own. The magic is in how their voices blend together, something Rolling Stone caught when reviewing the earlier Meade/Parker duet “Keep Me Hanging On” from Parker’s second solo album Tell It To The Dust. “Kendall Meade…lends credence to Parker’s already elemental songs. ‘Keep Me Hanging On’ is one of those songs that’s so perfect, it seems more born than written; Parker’s dry, slightly bruised vocals stir up Meade’s supple, simple alto until they match the same emotional pitch.”

In the end, Wild Chorus is ultimately about Meade’s and Parker’s voices and the songs they wrote together – 11 melodies that capture the spirit of two accomplished musicians and great friends.