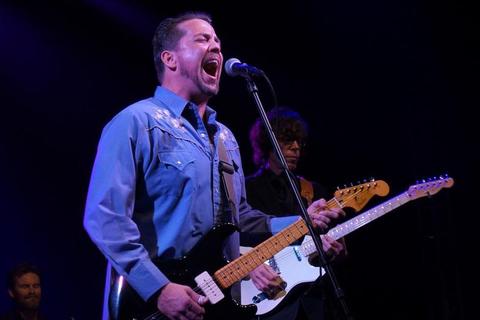 Listen to Them Shoes

On a given night (or on a given album) he'll swing through blues, folk, soul, bluegrass, maybe some classic 50s rock, or a punk speedball. He's a musical omnivore, devouring every popular music sound of the last 70 years, and mixing 'em all together seamlessly into his own stew. Yet, the one thing that most people notice about Patrick isn't his ability to copy - it's his authenticity. Like his heroes, folks like Bobby "Blue" Bland, Eddie Hinton, Doug Sahm, Joe Tex, Patrick somehow manages to blend all of these influences into something all his own.

It's no wonder that as a kid he immersed himself in his dad's extensive record collection: 60s folk, vintage country, soul, and, of course, blues. Patrick spent hours teaching himself to fingerpick along to Leadbelly, Lightnin' Hopkins, and other folk-blues giants.

In his late teens, Patrick began playing the clubs and coffeehouses around Kent, OH. He quickly gained a reputation for the intricate country blues style he was developing: part Piedmont picking, part Delta slide - with an equally impressive deep, smooth vocal style.

It wasn't long before Patrick drew the attention of other notables like Jimmy Thackery who was impressed enough to bring him on the road, and Roy Book Binder, who, after hearing Patrick's self-released debut CD 'I Wanna Tell You,' arranged his first appearance at Merlefest in 2002. Book Binder also turned his longtime friend Jorma Kaukonen on to Patrick's music, landing him a perennial slot at the legendary Fur Peace Ranch alongside guitarists like GE Smith, Marjorie Thompson, Bill Kirchen and Bob Margolin.

But Patrick wouldn't stay in the acoustic world for long. His love of 50s era soul and rock fused with the adrenaline-soaked garage punk revival happening throughout the Rust Belt pushed Patrick to form a band.

After 5 critically acclaimed CDs (two produced by longtime collaborator Dan Auerbach of The Black Keys), Patrick has earned a reputation as a true road warrior, touring constantly on his own, and as support to artists ranging from The Wood Brothers to The Gourds to Hot Tuna.

His sixth studio album (as yet untitled) comes out in June 2013, and was engineered and produced by Joe McMahan (Allison Moorer, Will Kimbrough) in his E. Nashville studio. Look for Sweany to be on the road again extensively throughout the year.